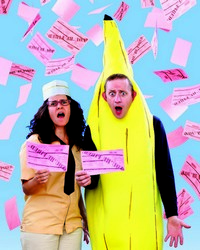 Please have your resume ready for review

99 Layoffs, by Vincent Delaney, opened at the Eulalie Scandiuzzi Space of ACT Theatre on Thurday night.  A highly topical multi-media play, it captures the zeitgeist of the past four years.    Through a series of sketches, and videos, the audience watches two characters, Louella, (Aimée Bruneau ) and Orson ( K. Brian Neel) as they navigate layoffs, job interviews, job searches, and worst of all:  actually working.

Each actor plays different characters, K. Brian Neel is a particularly talented character actor and played everything from a middle-aged psychotic to a narcissistic four-year old.  The excellent costumes by Julia Evanovich, helped make the character and scene changes very believable.  Different videos were played above the set during the scene changes, with various people discussing the worst job they had ever had, getting fired and or quitting these jobs; these videos were highly amusing.

Designed by Montana Tippett, the set served the production extremely well, the scenes took place in many different places and through a clever use of moveable panels it effectively and swiftly supported the various scene changes.  The absence of color on the set, just a bland version of beige, expressed the impersonal and dehumanizing nature of job interviews in today’s job market.

The strength of the show was the acting, directing and technical aspects, the strength of the play was the ability of the playwright to capture the effects of contemporary technology on job searches, which was amusing to the older generation, who started looking for jobs when resumes were typed on portable manual typewriters.  In addition, the playwright insightfully drew characters who were completely damaged by the economic climate.

With  strong sophisticated dialogue, rather like a 40’s Hollywood movie , the playwright demonstrated verbal prowess through hilarious double entendres.     Since the sexual revolution has made discussions of sex more direct, the art of writing sexual metaphors embedded in dialogue has almost been totally lost, but not in this play.   Indeed, there were many scenes where the actors verbally “dance” highly sexualized tangos, under the guise of discussing computers, musical instruments and appropriate behavior in a job interview.  This play is worth seeing just for the various cloaking devices the playwright uses to mask courtship.

The one downfall of the play was that there was no character development and in choosing to present the external situations of the characters in a condition not of their own making, the play seemed a little melodramatic.  Lacking in any real dramatic progression, the messages of the sketches were generally the same.  There are many other unpleasant consequences of unemployment besides just the endless job interviews, lays-offs etc which were not dealt with.

That being said, it was an enjoyable evening and well worth seeing.