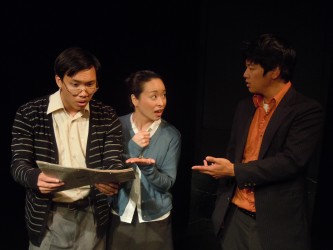 ReAct Theatre’s remount of David Henry Hwang’s 2007 semi-autobiographical comedy, “Yellow Face,” got off to a bit of a shaky start on the second Friday of the show’s run. Perhaps it was due to what I call the “second week slump,” when the excitement of opening weekend has worn off and the crowds have thinned.

Whatever the reason, a bit of a lighting glitch at the beginning and an overall low level of energy marred the first 10-15 minutes of the play – the most crucial time for any show as it sets the overall tone of the evening. Luckily, however, it was a short-lived slump, and before long the actors recovered their pace and served up a night of thoughtful and engaging theatre, but without the sidesplitting humor that probably had audiences rolling in the aisles on other nights.

Indeed, there was a bit of a somber hue that colored the entirety of Friday night’s performance, which was not brightened by the dark lighting and set designs by Robert Falk and David Hsieh (who also directed the show).   Even the sound design by Johanna Melamed struck a bit of a melancholic chord with the haunting and spiritual sounds of traditional Chinese music. The only bit of lightness and color came from the bright orange shirts worn by the show’s two main characters, David Henry Hwang (played by Moses Yim) and Marcus (played by Mark Tyler Miller). But even that seemed like an odd costume choice.

And yet despite these shortcomings, “Yellow Face” is a good show, and it is obvious that a lot of thought, skill, and talent went into it.

For example, the somber set-design mentioned above was also an intelligent mixture of both Eastern and Western traditions, combining the aesthetics of Ancient Greek architecture, which was reflected in statuesque pillars, along with the stony and intricate scaffolding of an Ancient Asian temple.

The music as well, though somber, reinforced the importance of one of the major themes explored in the play, — the question of race, and in particular, what it means to be “Asian.”

And of course, there were some fine performances on behalf of the ensemble cast, most of who are required to play a variety of roles. The strongest performance by far was that of Henry Vu in his role as the playwright’s father.  Jeremy R. Behrens also did a great job in his role as the slimy “New York Times” reporter, Mr. Name-Withheld.

In a time when “mainstream America” (aka “White America”) fears the rise of what has been dubbed “The Chinese Century,” Hwang’s play offers a brilliant look into U.S.-China relations as well as the struggles faced by “Asian-Americans” who often find themselves compromised between heritage and identity. It is a truly wonderful piece of dramatic writing, and I certainly encourage people to go see the show!