Ladies and Gentlemen, This is Your Crisis!, Infinity Box Theatre Project 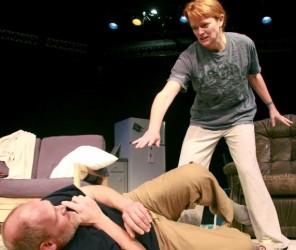 Ladies and Gentlemen, with apologies to Horace, let us dust off the debate concerning what theatre is and what it should do.  Should theatre delight, instruct, or simultaneously delight and instruct?  For those of you who prefer your theatre to instruct, the Infinity Box Theatre Project’s “Ladies and Gentlemen, This Is Your Crisis!”,  is your kind of show.  The play is Infinity Box’s first full-length production, though the company has already garnered attention through its annual “Galileo Dialogues” and through “Psychlotron”, its tag-team lecture series on unrelated topics.

Based on a 1976 Kate Wilhelm story, and adapted/directed by Catherine Kettrick, “Ladies and Gentlemen, This is Your Crisis!” concerns Lottie (Gini Hawkins) and Butcher (David Alan Morrison), a working-class couple who, having spent money that they do not have on a fancy, full-sized, Gigabid Digital WallScreen, resolve to spend an entire weekend watching their favorite reality TV show, “This is Your Crisis!”.  The TV-show-within-the-play airlifts contestants into a remote part of the Alaskan wilderness for “crisis therapy” and the chance to win five million dollars.  There, they fend off bears, wolves, frostbite, and their inner demons for prize money.  As the show constantly reminds us, however, “It’s not about the money; it’s about the chance to change your life forever.”  “Crisis!” mimics the inherent self-importance of reality shows.  You can almost hear Celebrity Chef Gordon Ramsay promising each contestant that they could be the next “Masterchef”, whatever that dubious title means.  The play’s dramaturgy reverses reality shows’ voyeuristic spectator/contestant relationship.  We watch not the television show, but the watchers of the program.  In doing so, we perhaps glimpse a not-so-flattering portrait of ourselves splayed in front of our television, barely conscious, watching as a reality show contestant insists that “they didn’t come here to make friends.”  As Lottie and Butcher, our surrogates, become increasingly engrossed in the show, consuming ever more beer and junk food, their behavior towards one another grows violent.  A friendly bet on the outcome of the show becomes an intensely divisive wedge.  That is, if either of them can rouse themselves off the couch long enough to duke it out.

Here, the debate concerning what the theatre is and what it should do resurfaces.  How to adapt a story about two people watching television to the stage?  The real gem of the production is Dustin Morache’s sound design, which utilizes a large cast of vocal actors, including Gin Hammond, Andrew Tribolini, and Kayla Adams, as well as original music composed by Andrew J. Perez to create the titular reality show.  Morache designs an immersive sound landscape that emerges as a third character in the drama, one quite a bit more interesting than Lottie and Butcher—though perhaps this is the point.  However, “To what end?” remains the five million dollar question, and the question to which “This Is Your Crisis!” does not yet seem to have an answer.  Does a pitch-perfect, beat-for-beat aural recreation of a reality TV show qualify as parody or homage?  For a genre that so frequently indulges in self-parody, what constitutes an informed critique?  Is the play a Marsha Norman-esque kitchen sink melodrama or is it a Beckett-ian existentialist exercise?  Though we watch them struggle and interact with each other for the better part of an hour, we learn frustratingly little about the two main characters.  They have names; yet for all intents and purposes, they could be called “Man” and “Woman”.  Similarly, their dealings with each other develop along stereotypically gendered roles.  Butcher drinks copious amounts of beer and tosses the empty cans on the floor; Lottie berates him, but she ends up cleaning their living room.  One longs for a story to connect us to these people.  We get only disconnected teases.  Butcher’s sister calls and leaves indecipherable messages on their answering machine.  His friends call and invite him to play an unspecified sport.  Neither of these intrusions results any action or plot development.  Instead, “Man” and “Woman” continue watching their WallScreen, which flashes red lights and sirens when any of the contestants find themselves in mortal danger.

Wilhelm, present on opening night, told the audience that the story emerged out of her anger with the frequently-rigged game shows of the 1950s and Sixties.  “Do they realize they’re being manipulated?” she asked, referring to both the contestants and the spectators.  Her anger, perhaps, was lost in translation in Kettrick’s adaptation, replaced by a sense of complacency.  Fiction, an interior medium, is notoriously difficult to adapt to the stage where everything must be either overtly expressed or suggested.  The choice to update the 1976 story and set it in the present day highlights its prescience, yet robs it of its foreshadowing appeal.  “This is Your Crisis” finds the most firm footing as a class critique of the hamster wheel that is a miserable low income couple working in order to pay for a gigantic television so that they can spend their weekends languishing in front of it.  Religion is the opium of the masses, as the oft-paraphrased Marx quote has it.  And reality television is emerging as our country’s secular religion.  Had these issues been more fully developed in the play, “This Is Your Crisis!” might have resulted in a more stringent critique of reality television and its attendant classist marketing strategies.  As it stands, this current project admirably reflects Infinity Box’s mission of using “the power of the theatre to ignite conversations about the human consequences of science and technology.”  In this respect, it succeeds.  As a theatre-piece designed to both delight and instruct, however, Horace might balk.