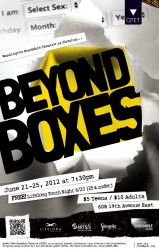 For those of you who might be wary of “teen theatre”, conjuring as it does images of peppy, fresh-scrubbed, Up-With-People faces singing in unison or disastrously misguided productions of “Oklahoma!”, fear not.  “Beyond Boxes” by Queer Teen Ensemble Theatre—currently playing at the Washington Ensemble Theatre’s 19th street black box over Pride Weekend—is “teen theatre” in name only.  Yes, there will be a drag show, a Cat Stevens sing-along, slam poetry, regular poetry, drunken renditions of riot grrrl songs, a talent show, and Prom [!!!]; but underlying these and other trappings of a high school musical is a sincere and at times profound meditation on identity and the meaning of community that belies the performers’ young ages.

The production is the product of a five-week workshop in which all interested participants (QTET has not turned away a single applicant in six years) are encouraged to “explore their voice and identity through a collaborative theatre process.”  Director HATLO explained to the audience that “The purpose of this program is not to help queer teens, but to empower youth that are already amazing.”  Watching the Queer Teen Ensemble, it is difficult to take issue with her statement.  The workshop participants helped to devise the play through their own reflective writings, creating a new canon of queer teen plays by and for queer youths.  Though “Beyond Boxes” suffers from many of the problems that seem to plague collectively-devised productions—the scenes are short and heavy on exposition, some characters are underdeveloped, and the whole piece has a disjointed, sewn-together quality—the ensemble’s achievement is palpable.  Anorexia, transgender angst, uncomprehending or cruel parents, alcoholism, and gay bashing, the hot-button after-school-special issues on which a less subtle group of dramatists would tend to focus, remain on the periphery.  Instead, Beyond Boxes portrays queer youth as [gasp!] normal teens dealing with everyday issues.  What will happen to my relationship if I go away for college?  How can I tell the girl that I like that I like her?  How can we find a new guitarist for our band?  How can I make friends at my new school?  Who am I taking to prom?  Does this skin-tight red vinyl dress make my butt look big?

The play begins with a brief prologue in which the dimly-lit ensemble confronts their relationship to their queer identities.  “Do I wear flannel shirts and leather jackets because I’m queer or just because I’m lazy?” muses one cast member.  Accompanying this Greek chorus of teens is audio from a series of inter-spliced actual news stories that provide context for the gay experience in 2012.  The audience hears a newscaster lament gay Rutger’s University student Tyler Clementi’s 2010 suicide amidst revelations that his roommate clandestinely and illegally filmed his intimate encounters with a man and made the live feed available on the internet.  Another news report concerns the pressing issue of gay marriage.  And Westboro Baptist Church founder Fred Phelps appears, defending his indefensible “theology”.  As interesting as these clips are, Skyler Burger’s engaging sound design, at times, competes with the live voices of the ensemble, creating a confusing cacophony rather than a supportive harmony.  Following the prologue, much of the action takes place in and around a queer teen community center run by the motherly Katherine (Biz Freebaim).  Alex (Pilar O’Connell), an alcoholic queer teen who has been kicked out of her parent’s house, lives at the center.  Her band, Wishful Thinking, is down one guitarist.  As luck would have it, the anorexic Jacy (Cara Clagg), new to the queer center, can shred.  Transgendered drummer Max (AJ Cali) crushes on his best friend, Lisbeth (Shireen Nori), who is leaving Washington for the bright lights of New York City.  His younger sister Hayley (Rogue Kalehua) experiences her emerging queer identity through a puppy-dog romance with precocious genderqueer newcomer Lazer (Marissa Erickson).  Elsewhere, aspiring dancer Janine (Kate Holmes) and singer-songwriter Taylor (Maggie Davidson) struggle with how Janine’s acceptance to an intensive dance school twenty miles away will affect their relationship.  Cross-dressing Simon (Jacob Braxton) deals with bullies at school and shy poet Rebecca (Emerson Lynch) tries to come out of her shell.

Each of these stories coalesces around a talent show at the queer teen center.  The play’s initial scenes, then, literally assume a predictable “getting the band together” structure as ensemble members ask each other, “Are you going to the talent show?”, “What are you doing for the talent show?”, “Can you play guitar?”  Once everyone is assembled, however, Beyond Boxes really finds its groove.  Jacob Braxton as Simon carries out the aforementioned drag show with panache, lip-synching to Lady Gaga’s “Telephone”.  The ebullient Marissa Erickson as Lazer leads the entire audience in a touching version of Cat Stevens’ “If You Want to Sing Out, Sing Out”.  Shireen Nori as Lisbeth throws down some angry slam poetry.  QTET veteran Emerson Lynch as Rebecca recites a poem about trying to find herself through writing and Maggie Davidson as Taylor plays an affectingly broken version of the Beach Boys’ “Wouldn’t it be nice?” on her guitar.  Finally, Wishful Thinking takes the stage for their drunken riot grrrl act.

Where, one might ask, are the life-and-death stakes?  Where is the careful building of rising action to a satisfyingly cathartic climax?  Can this really be a play about a group of teens putting on a talent show and then going to the prom?  Yes.  It can.  And that is not necessarily a bad thing.  What emerges in the talent show set-piece, and in the remaining scenes in which a deliciously decked-out Simon campaigns for Prom Queen, is that “Beyond Boxes” reflects the ensemble that devised it.  Amid stand out performances by Marissa Erickson and A J Cali, all of these young actors support each other, hollering just as loud as or louder than the audience for each talent show act, comforting each other through relationship trouble and identity crises, and clasping hands with each other for a final epilogue.  As a piece of queer teen theatre that empowers exciting young performers to find their own unique voices, “Beyond Boxes” succeeds.  And just in time for Pride, too.