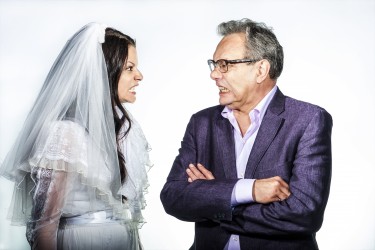 Six One-liners in Search of a Play.

“One Slight Hitch”, by Lewis Black, which opened at ACT Theatre, on Thursday night, is the sort of play which makes me feel despair about the contemporary American Theatre scene.

There was about enough material for a 10 minute play and although the program notes wrote about “the playwrighting prowess” of the author, the play actually had so many pitfalls as a play that it is surprising it ever got beyond the workshop phase.  Deadly for a comedy, the jokes were all predictable one-liners thrown in randomly.   There were the obnoxious boring jokes New Yorkers make about the provinces, contemptuous jokes about Republicans, as well as a lot of contrived gags to make it a very unfunny play.    Designed by Robert Dahlstrom, the set was brilliant and very aesthetically pleasing.  It spoke of the opulence of the medical profession in the pre-Clinton days and the actors seemed to move around it quite naturally.

The play was set in 1981, but did not deal profoundly with the zeitgeist of the time.  For those of us old enough to remember Reagan’s election, it was a time when the baby boomers realized that indeed the 60’s and its cherished progeny the 70’s were completely and irretrievably over. The plot revolves around a 30 ish doctor’s daughter and published writer, Courtney, played by Kimberly Sustad, on the morning of her wedding.  Her fiancé, Harper played by John Ulman, is excellent husband material, but the wedding is thwarted by the sudden appearance of her ex-boyfriend, Ryan, played by Shawn Telford, a bohemian slacker.

Unfortunately all the things that differentiate a two-hour play from a ten-minute play were absent:  character development, a subplot or even heightened conflict; the most damaging of all was the absence of wit.   The writing never rose above TV sit-com level, so I think the script has a great future as a Jennifer Aniston Romantic Comedy.

The biggest flaw in the script was that there really was not all that much at stake if the bride backs out of her wedding.  Lacking was the drama of Jane Eyre, for example,  whose wedding is thwarted by external forces and then has to make an earth-shattering moral decision with catastrophic consequences.  Not so Courtney, she is not pregnant, nor does she need to prostitute herself, by marrying, to save the family fortunes, nor is her ex-boyfriend a drug addict or alcoholic whom she feels compelled to save.  So we just have 2 hours of superficial fluff about the flowers, cake, etc

Another glaring weak point is that the author introduced a subplot about one of the sisters, Melanie, played by Kirsten Potter, who comes on sexually to the ex-boyfriend and announces that he will be her wedding date, but then the whole issue is not resolved and the matter is just dropped.   Obviously the bride’s decision to go through with the wedding or ride off into the sunset with the slacker, drove the action, yet Courtney, the bride, had very little time on stage, and her decision did not seem very anguished or important.

Although the director was working with some pretty bad material, he nevertheless had the actors play everything for laughs so that the direction emphasized the weak material rather than compensated for it.    There were two scenes which involved some very contrived directing.  The gags in these scenes were visual, in one the fiance walks into a room and somehow does not notice his bride passionately kissing her ex even though they are in  full view of each other.

In another scene, the sister, who attempts to seduce the ex-boyfriend, comes in after working the night shift  in a hospital as a nurse. Instead of looking tired after a long night on the wards, she bounces in with full make-up wearing very high wedgie heels and an over the knee nurses uniform-dress, making her look like she has just come from a Halloween costume party dressed as a slutty nurse.  In 1981, women did not wear anything above the knee, and nurses started wearing trousers  in the late 60’s.  One cannot exactly be a nurse in high heels, without ending up on the ward as a patient with one or two broken ankles.  Another unfortunate directorial choice was when the nurse comes in  at the end of her night shift ( night shifts in hospitals are usually 11pm -7am) , and helps herself to an ice-cube from an ice bucket already on the drinks table at 7:30 am, even though there are references to a hot summer day which may damage some of the food.

Also the numbers didn’t match up.  The parents talk about beginning their 30 year marriage with a no-frills wedding because of the war.  Although the war was not named, the description of the war was not the Korean war, but World War II which would have made them married for 40 years, in 1981

The acting ranged from adequate to inadequate.  None of the actors, not even a superb one like R. Hamilton Wright seemed real.  Delia, the Momzilla ( mother of the bride) played by Marianne Owen, screeched a lot and her nervousness was repetitive.  Katherine Grant-Suttie, as the youngest teenage daughter P.B, had a noticeable lisp and because of her overly sibilant “s” one of the first gags fell flat as she couldn’t pronounce “assistant caterer” well enough to be heard clearly in the back row.  I only caught the joke when it was repeated more clearly.   John Ulman, as Mr. Excellent Husband Material had a very wooden performance and seemed to be reciting his lines.

However, many people in the audience laughed at the appropriate places, although the people sitting near me seemed to be cringing, and the applause at the end was exuberant.