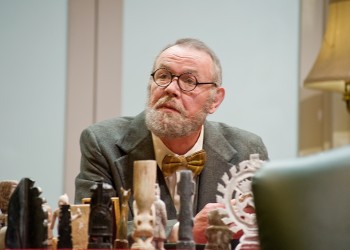 In the Northwest premiere of Freud’s Last Session by Mark St. Germain, Taproot Theatre offers us a glimpse into a fictional encounter between two historical figures, Sigmund Freud and C.S. Lewis.  It is September 3, 1939—the day Great Britain declared war on Nazi Germany—and Freud has invited Lewis over for tea.

Nolan Palmer plays an aging, hunched-over Freud who is suffering the final stages of oral cancer.  A staunch atheist and renowned intellectual, Freud is initially a bit intimidating.  He criticizes Lewis for arriving late and then explains that he hasn’t bothered to read the young professor’s latest book.  Still, Palmer’s Freud is quite likable.  He has a dry sense of humor and a twinkle in his eye as he pokes fun at himself as well as at Lewis.

C.S. Lewis, played by Matt Shimkus, enters the study nervously. His idealistic youth contrasts with Freud’s weathered cynicism, yet Lewis immediately proves his ability to match the doctor’s wit and intelligence.  Shimkus brings to life an intellectual theologian who can passionately defend his own faith while still identifying with Freud’s atheism.

The conversation is frequently interrupted by phone calls, coughing fits, news updates, and, most notably, sirens.  It is in these moments that the men cease to be the great intellectuals we study today.  They transform into two fragile human beings, fumbling for their gas masks and confronting their own mortality.  The actors transition well from intensity to levity and back again, preventing the mood from growing too heavy as they raise thought-provoking questions of faith, politics, psychology, and morality.

Freud and Lewis reach no earth-shattering conclusions.  Still, this production is a breath of fresh air in an election year clouded with closed-mindedness and petty name-calling.  The debate we witness in Freud’s study reminds us that two people with opposing views can argue respectfully with one another, learn from one another, and, most importantly, discover that their connection as human beings is far stronger than their opposing ideologies.