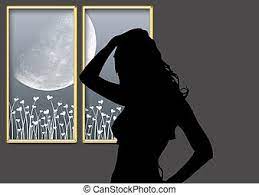 A Tango of Connecting and Repelling.

A brilliant production of The Woolgatherers, by William Mastrosimone, opened this weekend at 18th and Union. This two person play, taking place in a one room apartment in South Philly, a mostly Italian working class, 19th century, row house dismal neighborhood, demonstrates that two lonely depressed people can manifest their external symptoms in diametrically opposite ways, yet ultimately connect.

Along the way, the dialogue is mind-blowing. M. Keda Milles Jr. as Cliff, served up this witty, intricate dialogue, heavily laden with intense symbolism, with intensity and a generous side helping of humor. He had as much talent as all the best fire-brand famous comics such as Robin Williams etc. He kept up the pace at lightening speed and never missed a beat. It was a prime example of tour-de-force acting and writing.

The plot revolves around two lonely people, Cliff, a fast-talking, foul-mouthed truck driver, with a hyper East Coast sarcastic character, looking for a one night stand, who meets Rose a mousy, shy vulnerable dime store clerk. It doesn’t turn out the way either one expected.

They spend an evening at her seedy apartment, trying but rarely succeeding in having a conversation, until each reveals how empty their lives are, and these seemingly opposites actually do connect on an emotional level. Bianca Raso as Rose played her introverted, damaged character well, but as a former Philadelphia resident I found her choice of a standard American English accent, a little odd. Nobody of Italian descent who grows up in South Philly speaks like that. On the other hand, residents of South Philly are rarely understandable North of Center City Philadelphia, so the director probably made a good choice.

The writing is full of intricate and significant symbolism, which unites the couple long before it is acknowledged between the two, making The Woolgatherers a fascinating play to watch. The Sound by Joseph Weisnewski and lighting by Carolina Johnson added a lot to the general ambiance and Director Margie Slovan brought everything together in this timeless piece.

I heartly recommend this show. . 18th and Union has a great lobby and bar and the atmosphere is always Gemütlich. Also, a new café, Alexandra’s has opened two doors down. You can catch lunch before the matinee on Sunday, or a coffee after. And on Thursday nights, before openings they have pizza and music, but be sure to make reservations.