Seattle Opera is back!

Since premiering in Italy in 1896, Giacomo Puccini’s La bohème has become one of the most produced operas in the world. Since then, decades of opera goers have found themselves in the characters onstage. Young, idealistic artists trying to find their way through poverty, love and loss. While the opera was written 125 years ago, many of the themes and plotlines could be found in any modern drama. In the current production by Seattle Opera, the libretto by Giuseppe Giacosa and Luigi Illica (based on Scènes de la vie de bohème or Scenes of Bohemian Life by Henri Murger), feels particularly prescient and hits a little harder. 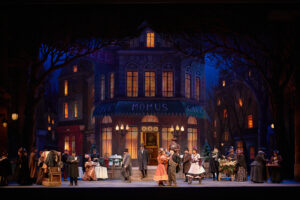 The opera begins with a boisterous and slightly chaotic group of artists/bros (Marcello, Rodolfo,  Schaunard, and Colline) bounding all over the stage and laughing in the face of their collective poverty. When they all leave to celebrate Christmas Eve at a café they leave Rodolfo behind. Enter the seamstress from the unit below, Mimì. She and Rodolfo have what in any rom-com would be known as a “meet cute”. She needs a light for her candle. He accidentally touches her hand. They fall in love. Now, this is an opera – and a Puccini opera at that – so we know it can not be this simple. But, for now, all the characters are keeping the cold and desolation at bay through sheer force of will and friendship and commitment to their artistic integrity. And, sure, Mimì is coughing suspiciously and Marcello is constantly drawn back to his problematic relationship with the passionate and dynamic Musetta but those are problems for after the intermission. 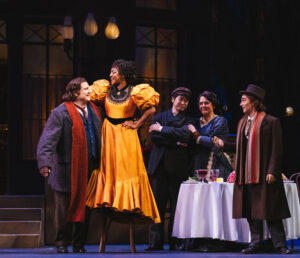 A few weeks later, Rodolfo’s insecurity which, at first seems charming, has turned toxic. Though, we learn it is only his way of distancing himself from Mimì whom he can see is sick and dying and he is trying to protect his heart. Overhearing this confession, Mimì tries to break it off with Rodolfo to spare him but, in the end, they just can’t quit each other. 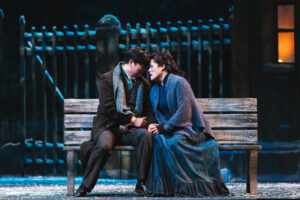 Time marches on, months go by and things have not gotten any better. Each pair is wrapped up in their own trials and tribulations but, when things turn to tragedy, they each drop everything and immediately do whatever is necessary to help a friend in trouble. And, whether it is the late 1830s in France or present day, that is all we can ask of family – even, or perhaps especially, if it is a family of choice.

The characters and melodies of La bohème are some of the most well known in all of opera and it takes an incredible cast to breathe new life into them and that is exactly what we have in the ensemble brought to the stage by Seattle Opera. The roles of comic relief are always important – particularly in an opera as tragic as La bohème and Ashraf Sewailam as Colline (sung on alternate performances by Federico De Michelis) and Schaunard sung by Eugene Villanueva (played on alternate performances by Theo Hoffman) are more than up to the challenge. They both have a playful and instantly engaging chemistry and in an opera replete with baritones, they each manage to bring out their own color and character to their voices. Then there is the electric and volatile Marcello and Musetta sung by Seattle Opera favorites John Moore and Ginger Costa-Jackson respectively (played on alternate performances by Michael Chioldi and Brandie Sutton). It is clear from the moment either of them enters the stage why they are continually brought back to the McCaw Hall stage. They have enough chemistry between the two of them to light most of Seattle and when they get together, forget lighting the city – they set it on fire. 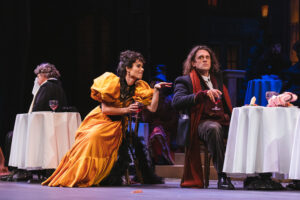 As the couple at the center of the story is Yosep Kang as Rodolfo (sung on alternate performances by Kang Wang) and Karen Vuong as Mimì (sung by Keri Alkema on alternate performances). Kang has an incredibly warm and full voice and he plays the arc of Rodolfo and his love for Mimì with a beautiful earnestness. Vuong has the gorgeous and delicate floating notes one expects of a Mimì, she also has a surprising power and strength both in her voice and portrayal of the seemingly fragile seamstress. 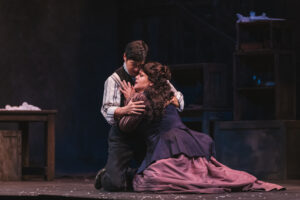 This production may not have the pomp and circumstance and spectacle that previous productions have had. The sets and orchestrations are pared down and the chorus is smaller than usual. However, none of that mattered to the crowd that gathered – vaccinated and masked and excited as all get out. After making it through the streaming productions, listening to old radio broadcasts and exhausting our favorite recordings, we finally get to come together and experience a live performance collectively in the bitter-sweet and fleeting way it was meant to be experienced. As Christina Scheppelmann said in her curtain speech, we will never take it for granted again. 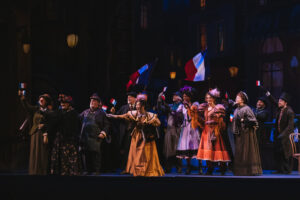 La bohème is being performed under the deft baton of Joseph Colaneri and stage directed by David Gately. Production design is by Ercole Sormani Scenography and the original costume designer is Martin Pakledinaz. La bohème is presented in Italian with English captions at Marion Oliver McCaw Hall through October 30, 2021.