As the twin threats of global warming and the Covid pandemic shatter the sense of entitlement to perpetual prosperity, a sacred principle to US Americans, and as Seattleites face drought, heat, and the Delta variant, the Williams Project presents Marisol by José Rivera. The play could not be more topical.

Set in an apocalyptic New York City, Marisol has not been written in the last few weeks, as I assumed, but in 1993, before global warming hit crucial levels, before the homeless crisis had hit EVERY city in the U.S. and before the COVID pandemic. Yet, the play spoke to what we are all experiencing right now in Seattle: environmental disaster and a homeless/addiction/mental health crisis, and how that undermines our sense of safety.

Employing the techniques of Magical Realism, that is to say, having supernatural figures intervene in a highly realistic setting, the playwright follows Marisol Perez, the highly assimilated daughter of Puerto Rican immigrants, as she navigates New York City during apocalyptic times. But she still lives in the Bronx of her childhood, therefore endures the perils of commuting, to her publishing job on Manhattan, using the New York subway.

The strength of the script was in the extremely poetic amusing dialogue, which made the subject matter watchable. Also the exposition was handled swiftly, clearly and drew the audience in immediately. Unfortunately, after about one hour, a new subplot emerges, which is repetitive, unfocused, less amusing and the audiences responded with fewer laughs and were restless. Had I not known that the play was almost thirty years old, I would have recommended a re-write, but not of the dialogue, which was to die for.

Although I saw it as a preview, you could have fooled me, as the strength of the show was in the outstanding production. As a stroke of genius, director Ryan Guzzo Purcell, chose an gritty outdoor setting, staging Marisol, in a Georgetown parking lot, adding to the ambiance in a way no indoor space could have replicated. The audience occasionally heard roaring muffler-less cars, sirens and motorcycles from the street, which did not detract, but rather added to the performance.

Everything about this production worked to a T, particularly the sound design by Matt Starritt, which enhanced the menacing nature of the environment created on stage. The Costumes/Set/Lighting by An-Lin Dauber were outstanding and without wanting to spoil anything the finale was celestially spectacular. 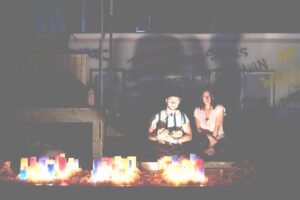 Yadira Duarte, as Marisol, led the superb cast, in a very demanding role. Playing several marginalized figures, Miquel Castellano was believable and effectively distinguished each role from the other. Alyssa Franks, as a cruel yuppie Manhattanite, was as repulsive as any Midwesterner’s worst nightmare. As the Guardian Angel, Porscha Shaw was just plain formidable. All in all it was a well directed group of excellent actors.

Although the script, in my opinion is flawed, the production itself is well worth a viewing. The Williams Project’s outstanding production of Marisol articulated the zeitgeist’s angst and offered compassion as a solution.

In the evening the heat had abated and it was rather pleasant sitting outside in a urban setting. Personally I am delighted that the Williams Project has survived the pandemic, their shows are always worth seeing.

N.B. Vaccination certificates are mandatory as well as masks in the indoor spaces. Updates about possible last minute. pandemic closures available on the website