Blackout-A One-Woman Show. On a porch!!!

Blackout: A One-Woman Show is a journey out of hiding and into the light.

In March of 2020, Hailey Henderson was in the early stages of preparing Blackout, as a live performance for her MFA Thesis project, at the University of Washington. When the COVID-19 Pandemic hit, Hailey adapted this autobiographical solo play, exploring the destructive nature of sexual and emotional abuse, as well as the cost of blending in to survive, into a live streamed show from her porch, Now, it will be performed live, in front of an audience, from the same porch in Seattle.

Henderson embodies her mother, her ex-boyfriend, her abuser and herself in a funny, edgy, radical reclaiming of her true story. This Summer, Blackout is going on tour for a series of intimate Porch Performances, hosted in private residences (and a few theatres too!) in all the cities Henderson has called “home.”

Described as a “safe show, dangerous material,” it is directed by Valerie Curtis-Newton, head of Directing at the University of Washington School of Drama and Founding Artistic Director of the Hansberry Project. 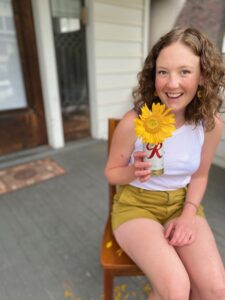