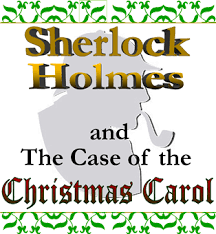 Harlequin’s hit 2019 production of Sherlock Holmes and the Case of the Christmas Carol is now available for viewing during our very unique Christmas season.  Playwright John Loganbaugh imagines what might have happened to Sherlock Holmes when the eccentric detective went missing for three years, while his creator Sir Arthur Conan Doyle took a well earned sabbatical.  The story line deftly meshes themes from Dickens’ Christmas Carol with some original clever mysteries and an exploration of Holmes and Doctor Watson’s characters.  The talented Terry Edward Moore plays Sherlock Holmes while Russ Holm takes on the roll of his faithful companion Watson. Aaron Lamb directs the production and keeps the pace moving nicely as Holmes has a very Scrooge-like learning experience.

While the one camera shooting perspective is somewhat limited, the filming of the show captures a good deal of the theater magic that occurred last winter in Olympia.  A ticket purchased by going to the Harlequin website:  https://harlequinproductions.org/ allows the viewer to keep the show for 48 hours.  The production will be offered through December 31.