“Solo on the Drums” Presented by The Seagull Project 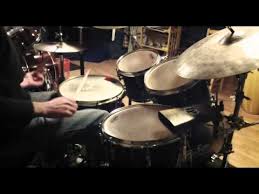 The talented writer Ann Petry came to Harlem from Connecticut in 1938 and joined the Harlem Renaissance movement. Although she is mostly known for her outstanding novel The Street, she also penned a number of intriguing short stories before returning to Connecticut. Her exit from New York was partially due to the hounding of the McCarthy era Red Hunt. Petry’s short story “Solo on Drums” was written in 1947 and is a wonderfully lyrical work, thus making it a perfect addition to The Seagull Project’s Great Souls: Time Signature.

Reginald Jackson reads the story; Christopher Icasiano accompanies him on drums. “Solo on Drums” tells the story of the outstanding drummer Kid Jones, and his afternoon gig at the Randlert Theater in Manhattan.  Jones has already had a bad day: his woman is ready to leave him for his band’s piano player. His drumming with the band this day will provide him pain, solace and finally exaltation. In her story, Petry explores the thrilling powers of jazz music, allowing musicians to somehow escape their physical limitations to ascend to higher levels of consciousness and experience.

The production directed and produced by Gavin Reub successfully blends Jackson’s narration of Petry’s words with Icasiano’s terrific drumming. Petry writes that as Jones plays, it seems to him that the music comes “not from the drums but from deep within himself; it was a sound that was being wrenched out of him—a violent, raging, roaring sound.” The Seagull Project’s presentation perfectly animates this concept.