The Pink Unicorn—From Jolene to Jo

This piece was produced originally in Washington by DogTown Theatre. Then the play was invited to perform at the United Solo Theatre Festival in New York, where Elise won the Best Storyteller award. Now it has been performed elsewhere in the United States and Canada. Now the show is here in Seattle!

The Pink Unicorn follows a Christian widow who lives in a small conservative Texas town with her one child. Her life is thrown into turmoil when her teenager comes out to her as gender queer and pansexual*. In addition to that, they want to start a chapter of the Gay Straight Alliance (GSA) at the local high school. The piece begins with the coming out of Jo, and sees the aftermath when the high school and the town’s negative views on the LGBTQ community are rearing it’s head
This piece follows along the coming out story of a teenager, but instead of the point of view being from the teenager, it follows the point of view of the mother, Trisha. I enjoyed the switch of narrative for a coming out story. As a queer individual myself, I love to hear queer narratives from the point of view of the other queer individual, yet it is a unique experience to see it from the other side—from the parent.
This show doesn’t only focus on the aspect of having a child come out in a conservative town. The coming out aspect was only one piece of the puzzle. Family can be one of the most nerve-wracking parts of coming out. Will they accept you or shun you? Throughout Trisha’s narrative, she always accepted her child, even through her confusion on what it meant for Jo to be pansexual and gender queer. Paula’s interpretation of Trisha really showed her devotion to her child as a parent even if she’s confused by anything not heterosexual or cis. Even through a zoom performance, it was evident that Paula’s Trisha did want to understand and to be there for her daughter—even if that meant the town and her family shunned her. 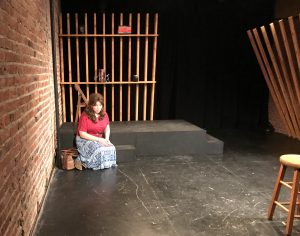 (Paula Wilson Nitka as Trisha)
The show is playing for three more performances, and I urge people to go and see this one-person piece. It’s entertaining for members of the LGBTQ community, and for family and friends of people who have come out to them. Tickets range from $10 to $45. The latter is for a watch party (any number of people watching from a single stream), and the former is the discounted price.
*Pansexuality is sexual, romantic or emotional attraction towards people regardless of their sex or gender identity