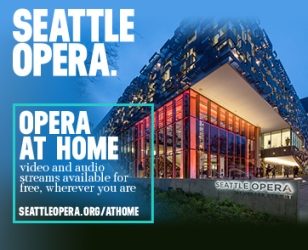 This week, Seattle Opera announced its new recital series, Songs of Summer, which will bring beloved singers to a new stage—your phone, tablet, or computer screen. Beginning weekly on May 28, recitals will be available to stream on Seattle Opera’s website, Facebook, and YouTube.

“Opera companies need to be flexible, adaptive and of course very creative if we’re going to get through this uncertain time,” said General Director Christina Scheppelmann. “At some point we will return to McCaw Hall. In the meantime, opera can still bring us joy, comfort, and touching moments of humanity—even though we cannot be together to enjoy these moments.”
The concert series kicks off on May 28 with international star Angel Blue, who performs a mix of opera and spirituals in a 30-minute program with pianist Jay Rozendaal. Many will recognize Blue from the viral HiHo Kids video, “Kids Meet an Opera Singer.” Prior to the cancellation of Seattle Opera’s May La bohème, the American soprano had been scheduled to sing Mimì.
“I love Seattle Opera and consider this to be one of my home theaters,” said Blue, most recently Bess in Porgy and Bess. “I was very sad to hear that La bohème was canceled, but the opportunity to share a recital with the Seattle Opera audience was an idea that quickly lifted my spirits. This recital gives me the chance to be creative and engage with one of my favorite opera companies in the world. I hope that everyone enjoys it.”

The following month, “opera’s nose-studded rock star” (The New York Times) Jamie Barton lends her voice to Songs of Summer. Accompanied by Jonathan Easter on piano, the acclaimed mezzo-soprano will offer musical theater hits such as “I Can Cook, Too” from On the Town by Leonard Bernstein, “What’ll I do?” by Irving Berlin, and “Hear My Song” from Songs for a New World by Jason Robert Brown. In addition to her triumphs as a singer, Barton is recognized for bringing conversations about body positivity, social justice, and LGBTQ+ rights into the spotlight. She made her company debut as Fenena in Nabucco.
Online viewers will also be treated to a June 4 recital from Tess Altiveros (lead soldier in The Falling and the Rising), who will be accompanied on piano by Elisabeth Ellis. On June 18, watch Margaret Gawrysiak (Madame Larina in Eugene Onegin) with pianist Jeremy Reger. On June 25, John Moore (title character in Eugene Onegin and The (R)evolution of Steve Jobs) sings accompanied by Tim Barrick on piano.

Songs of Summer continues with Will Liverman (who recently made history as the first Black Papageno at The Metropolitan Opera), Ben Bliss (Peter Quint, The Turn of the Screw), Shelly Traverse (Chan Parker, Charlie Parker’s Yardbird), Nerys Jones (Inez, Il trovatore), and Damien Geter (Colonel, The Falling and the Rising). Two singers who had been scheduled to make company debuts in La bohème, Vanessa Vasquez (Mimì) and Theo Hoffman (Schaunard) will also perform. Additional pianists will include Beth Grimmett-Tankersley and Jessica Hall. In the coming months, Robert McPherson will also treat Seattle Opera audiences to a special edition of his hilarious program The Drunken Tenor.
www.seattleopera.org/summersongs.