“Social psychology” is defined as the study of human interaction. How we respond to each other and how we react to each other. Due to our complex nature, social psychology is a fascinating field of study. What makes me laugh can leave you cold. The movie that brings me to tears puts you to sleep. The individual I find fascinating seems dull to you. It goes on and on. “Shattering” opened at Tacoma Little Theatre this weekend, and it is a two-hour course in social psychology. Inspired by the story of a grieving mother who offered to love her son’s killer instead of having him put to death, it tells a harrowing tale. Chris Serface, Managing Artistic Director of Tacoma Little Theatre, took the reins of direction for this play. His expertise guides his cast, and his audience, on a night to remember.

It’s a four-person cast that performs “Shattering,” and two of them are newbies to this or any other American stage. One of them is new to the TLT stage, and one is an old hand (if by “old hand” we mean she’s been here twice before). We wouldn’t have picked any of them to be anything but seasoned vets.

Robin McGee makes her third trip to TLT, interpreting the role of Jacqueline “DeeDee” Dawson. Grieving the loss of her son, she takes a troubled youth into her home and, eventually, her heart. We spoke highly of Ms. McGee when she was on this stage in “A Doll’s House,” and she follows that fine performance with a world-class effort in this show. The character of DeeDee is fascinating because one normally pictures a forgiving spirit this profound as coming from a “Come to Jesus” place. DeeDee isn’t about Jesus, but she is about diving into the meaning of life and the impulses behind our actions. Ms. McGee found her inner DeeDee and emptied her on to the TLT stage in what was a superb performance.

Drama in the Hood has enjoyed watching Donovan Mahannah’s growth over the last few years. Talented, but raw, in last year’s “Bye, Bye, Birdie” at Centerstage, Mr. Mahannah puts his best performance to date on the TLT stage in “Shattering.” It is said that a stage performance can best be measured by the distance the character can travel without losing credibility with the audience. Mahannah’s Jonah is mistrusting, defiant, confused, desperate, and hopeful. We believe them all.

Making her American stage debut in this show is Cynthia Kinyanjui in the role of Labelle, whose character arc travels almost as far as Jonah’s. Early on, she’s a young (heartbreakingly too young) lady in love. Later, she recounts the event in her life that would leave any of us jaded if it happened to us. Finally, midway through the second act, her desperation makes her the de facto driver of a plan headed for hell! Ms. Kinyanjui is a splendid young talent who is in charge of this character from the beginning. Mr. Serface chose her well and directed her beautifully through this gripping role. 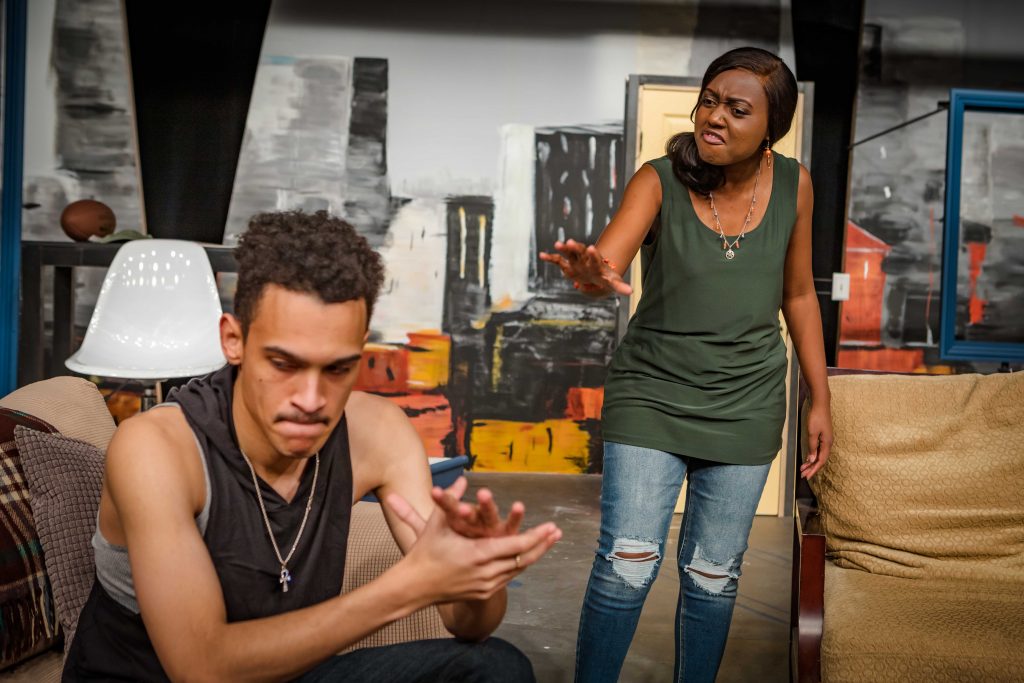 Joshua Hector’s role as the deceased son, “Sonny,” is well-drawn, as well. Mr. Hector’s most compelling and believable portion of the show was his time in a religious camp. His portrayal of true-believer Christian fervor was beautifully performed. This show marks Mr. Hector’s first time on a live stage! Drama in the Hood offers a heartfelt, “welcome and well done.”

Tacoma Little Theatre sets are consistently some of the best in the South Sound. For this show, Master Carpenter Blake York and Lead Carpenter Frank Roberts earned kudos for cleverly creating three different spaces. Likewise, the two leads owe their gratitude to the build and paint crew who helped realize Mr. Serface’s vision.

Unfortunately, those who attend a performance during the rest of the run will not get to experience a thrill the first two night’s customers received. This is a world premiere, and author Pat Montley was in attendance for the first two performances.

A word of caution. When you go to this show (and you absolutely should), arrive on time! If awards were given for visual effects, this show would get one for something that happens less than five minutes in. We won’t go into further detail. Trust us!

How many plays stick with you in the coming days? Hours, perhaps, but days? “Shattering” will stick with you and tickle your sensibility long after the curtain comes down. It reintroduces reconciliation into a world that is drifting apart as if propelled by jet fuel. We do not often invoke the word “important” into stage reviews. But, “Shattering” is all of that. Treat yourself to this show, and then treat the show to your warmest applause.