‘Holmes for the Holidays’ a Throwback Treat for TLT

Recently, Drama in the Hood had the opportunity to see a theatre production without being at work at a theatre production. It gave us a unique chance to enjoy the show without writing a review in our minds. That night, a lovely lady to our left asked us which of the South Sound theaters we like best. It was kind of a “which one’s your favorite child” moment, but we answered it. What we love most about South Sound theatre is the different personalities of each house. Tacoma Musical Playhouse brings classics to their big stage, while off-kilter, and fervent, plays at Lakewood Playhouse. But, Tacoma Little Theatre does vintage and vintage-style comedy better than any other house around. That’s a long way of saying, “Holmes for the Holidays” is firmly in Tacoma Little Theatre’s wheelhouse, so it is a treat for the audience and a treat for TLT.

Written by the great Ken Ludwig, and directed by local legend Jennifer York, “Holmes for the Holidays” is an homage wrapped in a mystery and presented to the audience. William Gillette (a real actor) played Sherlock Holmes over 1,300 times in his long career. This production pays tribute to the man while needling him (just a little). There is a murder…or is there? Who can solve the crime…or not?

Dave Champagne plays the great actor who is hosting a theatre-folk gathering at his Connecticut estate. For those old enough to remember William Gillette, Mr. Champagne’s portrayal is eerily accurate. The timbre and pacing of the man playing a man playing another man (I’ll type slower if it’s hard to follow) is pitch-perfect, to the point that it is hard to imagine a better casting decision.

Mr. Champagne’s performance is worth the price of admission, but he is hardly alone in stage talent. Shows that honor the 1930s nearly always need a Mom, “but always called ‘Mother’ back then” character. Lissa Valentine’s Martha Gillette gets some of the best lines, and she delivers them for maximum effect.

Blake R. York is known more for his scenic design than his stage work, but he is great on the stages his crew builds. As Felix Geisel in this show, Mr. York displays the split-second timing the script requires. If he is slow, the moment is shot, but too quick, and the set-up is incomplete. Blake R. York has rarely been better.

Frank Roberts is at his best when, as the expression used to be, cracking wise. As Simon, Mr. Roberts counterpunches with Champagne’s Gillette throughout their time on stage together. Every show, at least the ones that intend to be funny, needs a counterpuncher. Mr. Roberts can be that man!

Robin Mae Becar, playing Simon’s fiancee’ Aggie, also displayed excellent timing in this quickly-cued script. Alongside Heidi Walworth-Horn’s Madge Geisel she showed her man how far he could go, while testing those same limits herself. Ms. Walworth Horn’s performance was flawless, and her comic timing was great.

In her Tacoma Little Theatre debut, Danielle Locken made the most of her time on stage as Daria Chase. Her appearances were at times, expected and dreaded, and at times a surprise, to say the least. 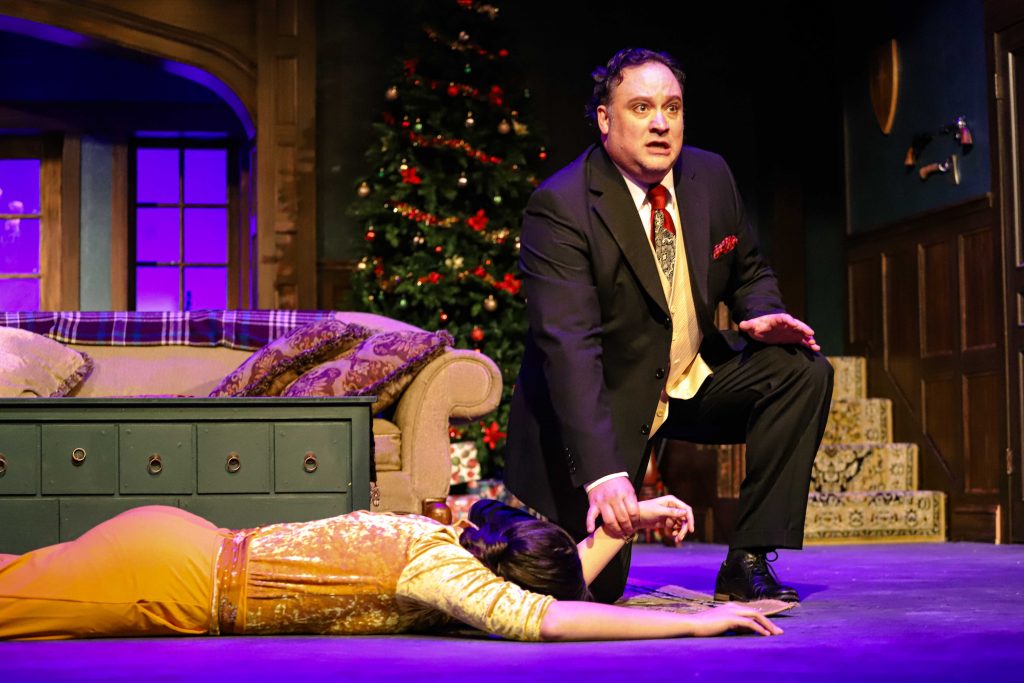 Daria (Danielle Locken) & Gillette (Dave Champagne), in this treat for TLT and for the audience. “Holmes for the Holidays.”

Finally, Anne Marie Rutt, as Inspector Goring, was superb in a role that called for “less is more” in facial expressions. Well done!

By the way, we at Drama in the Hood forgive the cast of “Holmes” for the things they say about theatre critics. We know they don’t mean it…we also know we will review them again. Be nice, because we know words…

We already mentioned Blake R. York and Frank Roberts for their work in the script, but as master and lead carpenters, respectively, of the set, they deserve another round of digital applause. This set is a marvel of solidity and is a character in the show. We know they did not work alone, and that they owe three Round Table pizzas and a couple of pitchers to their build and paint crew.

There are shows on stages all over the South Sound this season. How do you choose? It would cost a fortune to see them all. That is unless you view these entertainment opportunities through a different lens. Take a loved one to see “Elf” as a present.  He, she, or they can reciprocate to “Holmes for the Holidays.” Share an evening or afternoon with “The Best Christmas Pageant Ever” with work or social groups. Voila, Christmas shopping mostly complete, so enjoy a post-show nog and a cuddle by the fire.

We have the best ideas!

“Holmes for the Holidays” is a treat for TLT. But more than that, it is a treat FROM Tacoma Little Theatre. Wrap up in it, and enjoy the witty and gifted cast.