‘Calendar Girls’ Works on Many Levels for Tacoma Little Theatre

A busy weekend of opening nights for South Sound theatres came to a close Sunday afternoon with Tacoma Little Theatre’s presentation of “Calendar Girls.” It was both a familiar type of TLT show and a departure from the norm. It works as a comedy, as a drama, and as a period piece. “Calendar Girls” kicks off TLT’s 101st season in a good way, as it was well-received by a capacity Sunday matinee crowd.

First, a little history and thanks to the staff and management of Tacoma Little Theatre for putting educational material in the program. The “Girls” are part of the Women’s Institute, which is a still-thriving group in the United Kingdom. The goal is to publicize and support rural activities, in particular, agrarian food production. Think of it as a kind of Grange with a feminist bent. The W.I. began in Canada in 1897.

Who among us hasn’t wracked our brains pondering how to fundraise for our group’s cause? The Women’s Institute raised money every year, with mixed results. This year, some of the more progressive thinkers in the crowd decided that a calendar, featuring the members of the group, naked, but with their crafts covering up their bits, would be a seller. The proceeds would go to purchase a small remembrance for one of the group’s departed husband. As a sales technique, the calendar would be a success. But, would friendships survive the ordeal and the resultant publicity?

Let’s put something on the table right off the top. Who knows where the community theatre awards will fall next summer. But, if there was an award for courage by an ensemble, this show would waltz away with the prize. Mad props to this cast of women for courage and willingness to lay it all out there for art.

At the show’s outset, the women of the W.I. are going through the motions, quite literally. Supposedly leading Tai Chi training, the instructor/group member didn’t even bother to learn the actual exercises. Instead, she’s making it up as she goes. When the idea of a calendar comes to light, though. the leader is the most enthusiastic of the group. Playing the leader, Chris, is Shannon Mahan. This role is the one on the cast with the greatest nuance and Ms. Mahan is more than up to the challenge. Chris may lose track of the goal, occasionally, but Shannon Mahan never loses her focus. She’s great in the part.

Two of the South Sound’s most-veteran actresses are also two of our very favorites. Playing the role of “Jessie” is Sharry O’Hare, and playing “Marie” is Jen Aylsworth. What a treat to watch these pros work! Ms. O’Hare has a voice that will carry twice the distance of TLT’s large hall, and Ms. Aylsworth can say with an eyebrow or gesture what it takes others a soliloquy to get across. Director Vicki Webb assured herself of a success when she talked these two into taking part.

Dayna Child’s’ “Annie” carries much of the dramatic water in this show, and she does it very well. She suffers a loss early on, and the toll it takes on her is both immediately apparent and shown as grief over time. The sniffing heard in the audience during Dayna Child’s best scenes was not a result of hay fever. 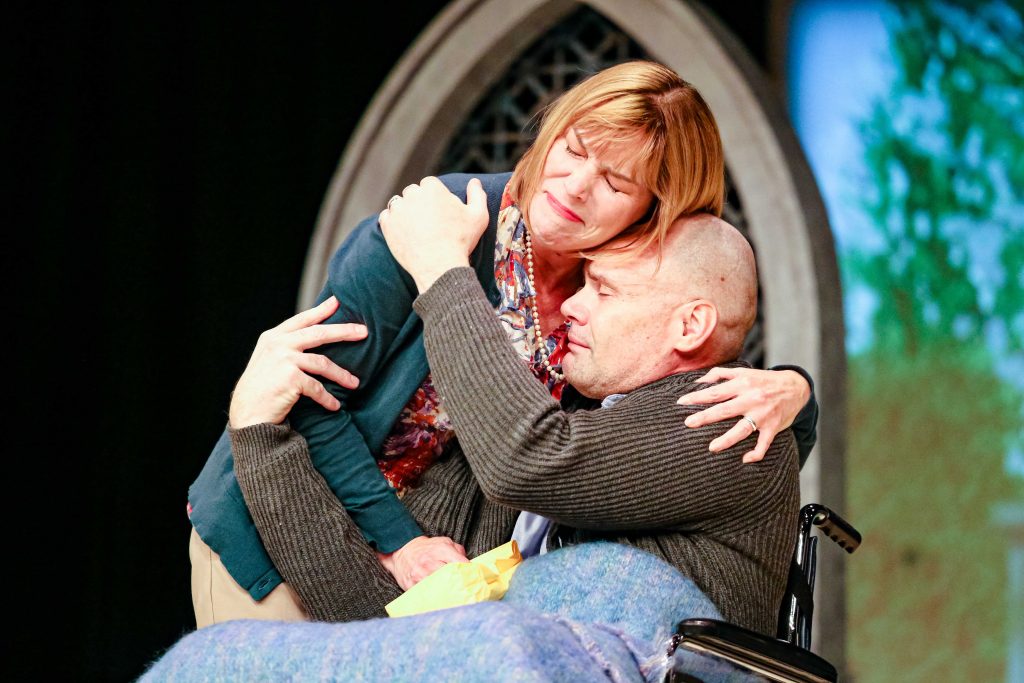 W. Scott Pinkston’s “John” is the character that Annie loses. By now, South Sound audiences know that there is nothing that Mr. Pinkston cannot do. His role is not large in this show, but his large and in charge talent makes it look bigger than it is. Kudos to Ms. Webb and her creative team for the breathtaking portrayal of John’s passing.

Karen Christenson plays “Cora.” Her religious upbringing and current occupation in the church make a calendar of this sort problematic for Cora. But, she soldiers on and Ms. Christensen’s performance is one of the best in the cast. She shows Cora’s reluctance, and she shows Cora’s pluck. Then she shows 90% of the rest of herself to the photographer. Bravo, Karen!

Dawn Brazel’s “Ruth” originally declines to be a part of the month-to-month layout. But, after some thought and not a little fruit of the vine, Ruth decides to join in. Both sides of Ruth are beautifully portrayed by Ms. Brazel, and her every facial expression is in line with her character’s mood of the moment. It is a lovely acting job.

Tristin Nelson plays the calendar photographer. It is a small-ish part but one that is very important to the whole. Mr. Nelson’s job was made that much easier by significant help from Resident Properties’ ace Jeffery Weaver. The prop placement and scene set-up was important to the photography aspects. The help from the artistic staff and Tristin Nelson’s innate talent and stage nuance made it all work.

Finally, Carrie Sleeper-Bowers, Kerry Bringman and Stephanie Leeper all made a positive impact on this show. Ms. Sleeper-Bowers makes everything she is in, that much better, and the same can be said for Mr. Bringman. As for Ms. Leeper, her smile and enthusiasm light up the stage, and she is always a welcome addition to a cast.

“Calendar Girls” is unlike anything else that you will see this fall. That’s saying something, because local theatre is on fire this season! But, make plans to see this show for its’ uniqueness, good performances and, well, did we mention the courage of the cast? We did, but it “bares” repeating.