“Mamma Mia” was born many years ago in the work of the Swedish pop group “Abba.” It took shape as a movie starring Meryl Streep and an all-star cast. Then another movie. Now, it is ubiquitous in community theater. By our count, there are 27 productions of Mamma Mia taking place in the Greater Seattle Area between last season and the upcoming one. That’s a ton of Abba! “Take it easy, take it easy.” Actually, don’t. Three South Sound theaters presented this show in the last three months. In the unenviable anchor position, Paradise Theatre (late of Gig Harbor, and now carving a niche in Port Orchard) opened the show this weekend. How did they do? Or, in the words of Abba, “What’s the name of the game?” Read on.

A female-centric show such as this one will live or perish on the performances of the women in the cast. In particular, the mother/daughter team of Donna and the precocious Sophie are key to any production of “Mamma Mia” to be a success. Luckily, Paradise’s co-founder and Director of this show Jeff Richards, chose well for his key roles.

Drama in the Hood was particularly interested to watching the role of Donna, as interpreted by Nita Wilson. We had seen Ms. Wilson on stage several times, but always in supporting roles. The role of Donna is anything but supporting. It is, in fact, the linchpin of the whole show! How did she do? Very well indeed! She took the Abba stylings and subtly changed them to make them her own. Where the Swedish pop group wrote songs with choppy, often staccato, rhythms, Nita Wilson is more of a balladeer, employing long notes of strength and import. With the help of music director Sadi Wentz, “Mamma Mia” was better suited for Nita’s strengths post adjustments. All in all, Donna was well-drawn by actor, director, and the musical staff. Well done.

To say we were “particularly interested to watch Nita Wilson,” is a huge compliment to her co-star. Drama in the Hood knows what we have in young Madelyn Bjorn. This 16-year-old stage pro’s star is rising quickly. Already nominated for a post-season award for her performance in “Newsies,” Ms. Bjorn took on the more experienced actresses who played Sophie in the previous two productions and matched them note for note, nuance for nuance, and dance step for dance step. This show has over a dozen musical numbers involving Sophie. Madelyn Bjorn hit them all, with a flawlessness, power, and accuracy that belies her age, and anyone ten years her senior. We’re in awe. Paradise has a few thoroughbreds in their stable of talent, but none with greater potential going forward than Ms. Bjorn. 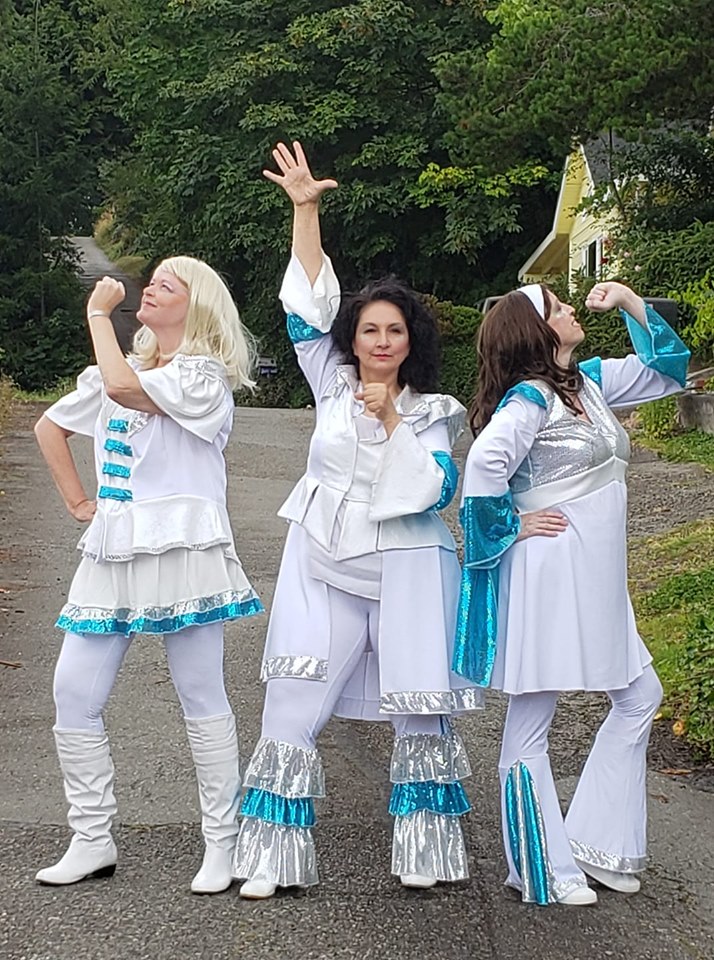 l to r, Courtney Turnley, Nita Wilson, and Kim Myers, as they reprise their Mamma Mia roles on the streets of Kitsap County.

Speaking of thoroughbred talent (if I may be allowed to continue the equine imagery) in the Paradise stable, Kim Myers as Rosie turned in her usual stellar performance. Ms. Myers has a deft touch for comedy moments and a great voice to boot. We were impressed with her singing voice as a solo. We were impressed with her partner in crime Courtney Turnley’s (Tanya) singing voice as a solo. But, we were particularly impressed with their voices in harmony with each other. They were some of the musical highlights. The Donna and the Dynamos portions were strong, as well. Except for a brief search for the harmony at the beginning of “Chiquitita,” the trio of Wilson, Myers, and Turnley were in splendid voice. Kudos to all three, individually and collectively.

Sophie’s friends come to her wedding, and Sadi Wentz and Madison Lefever play those roles. The three young ladies played off each other as if they are real-life buddies. In fact, it was the best cohesion of these three roles of any that we have seen this year.

We already said that “Mamma Mia” is a female-centric play. That said, the three potential fathers (that’s not a spoiler if you know anything about this show…and you do.) play important roles in the advancement of the plot. In this show, each man brings something unique to the play. Garry Fetterplace’s Harry Bright has the best chemistry with Nita Wilson’s Donna. Bill Benjamin’s Sam is the most sincere of the three Dads, and he sings a lovely “Knowing Me, Knowing You.” Eli Ghorley brings his unique Eli-ness to the role of Bill Austin. Those who have gone to Paradise shows in the past know instantly what that means and newbies will soon. Watch Mr. Ghorley in the background while the action is focused elsewhere. Also, this production of “Mamma Mia” is a little bawdier than the others we’ve seen. Eli Ghorley’s comic stylings are a big part of that.

The work of the ensemble on the diminutive Dragonfly Cinema upstairs showplace impressed us. Ensemble standouts include Emily Williams, Lukas Brambila, and Dante True. Mr. Brambila and Mr. True appear to be channeling some of “Night at the Roxbury” in their dance moves, while Ms. Williams’ steps and turns are spot on. All three are talented young people with bright futures ahead.

Go ahead and ask the question that you are dying to ask.

Okay, Mr. Drama Hood. What if I have seen Tacoma Musical Playhouse and/or Bainbridge Performing Arts do “Mamma Mia” already? Is there any reason to see this one too?

Glad you asked, because the answer is yes! As we drove home from the show, we asked ourselves this same question, and the answer came to us in the word “fun.” Paradise’s production isn’t as elaborately staged nor does it have the live band that the bigger theater’s boasted. But, this was the most fun of the three! It’s bawdier, to be sure. Eli Ghorley and Kim Myers made sure of that. But, bawdy alone doesn’t equal fun. What does equal fun is that the Paradise stable (there’s that word again) of talent know each other’s moves and play together as well as any company in the South Sound.

Besides, Paradise needs to see your smiling face and feel the crinkle of your money in their hands. This has been a hard year for Paradise, but they are coming off the ropes swinging! Wanting to make their Dragonfly Cinema home permanent, Paradise needs help to get over the finish line. If 10,000 theater lovers give them ten bucks each, it’s practically a done deal. If you have 100 grand that needs a charitable donation home may we suggest Paradise Theatre. I’m willing to bet they will name something after you if you create that kind of rain.

So, for those two reasons and more, see “Mamma Mia,” produced by a theater for whom we love to root. Voulez Vous? Why, yes you do.