An entitled, womanizing politician who is constantly evading scandal and/or consequences and who delights exploiting those below him. This is not the latest Shonda Rhimes villain or a story ripped from any number of current headlines but the antagonist in an opera from 1851. Rigoletto, composed by Giuseppi Verdi, is currently (and far too easily) being brought into the 21st century on the Seattle Opera stage. 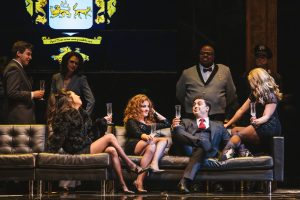 We begin with the party already in progress. The lecherous Duke of Mantua is strutting all over the stage and high-fiving his bros over his latest conquest. The titular Rigoletto, the Duke’s jester, enters the scene. He ridicules all the powerful men around him, believing that he always has the protection of the court behind him. This is put to the test when the father of one of the women who has been used and abused by the Duke comes to exact revenge. He places a curse on both the Duke and Rigoletto for his part in the incident. 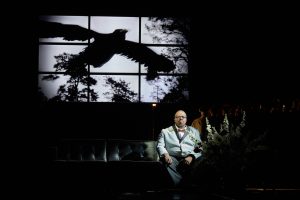 Lester Lynch returns to Seattle Opera as the title character in Rigoletto.

Rigoletto heads home to his daughter, stopping for a quick chat with the hitman Sparafucile. With the curse weighing heavy on his mind, Rigoletto is eager to make sure his pure, innocent angel of a daughter, Gilda, is completely protected and isolated from the world. Little does he know that a mysterious stranger (spoiler – it’s the Duke) has been wooing her during her one allowed outing to church and she has fallen head-over-heels for him as only a young, operatic ingénue can. 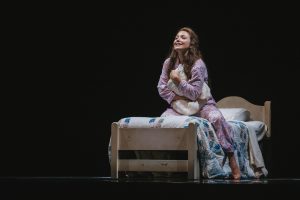 As the curse continues to wreak havoc on Rigoletto’s life, his daughter is kidnapped (an act in which Rigoletto is an unknowing participant), she is violated, and his relationship with the Duke is severed. He turns to the hitman, Sparafucile, and decides to exact his revenge. Needless to say, it does not go as he planned and this tragic opera ends with Gilda dead in her father’s arms as Rigoletto yells to the heavens “La maledizione!” (“The curse”) and the Duke goes on with his life completely unaffected as though nothing had happened. 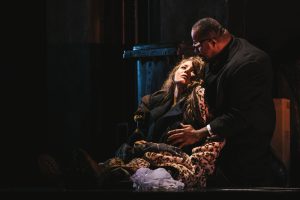 With a work as complicated and potentially problematic as Verdi’s Rigoletto, the potential for disaster is high. Lindy Hume and her spectacular team not only ably avoid catastrophe, they are completely triumphant on most every level. As the complex and enigmatic Rigoletto, Lester Lynch (sung on alternate performances by Giuseppe Altomare) is strong and dark and vulnerable and even in the most soap opera of moments, he remains grounded and true. It is obvious why the team at Seattle Opera keeps bringing him back to the stage. Liparit Avetisyan as the loathsome lothario the Duke of Mantua (Yongzhao Yu on althernate performances) is outstanding. His tenor soars without ever sounding strained. Avetisyan switches effortlessly between the swagger and superiority of the “big man on campus” to the stereotypical desperate, begging tenor – whatever he needs to manipulate whomever is opposite him. In the role of the chaste and noble Gilda is the transcendent Madison Leonard (sung alternately by Soraya Mafi). Her performance of Caro nome is truly spectacular. Every malisma has a meaning behind it and every crescendo or floated high note has a motive. Special shout-out to the dubious brother/sister team of Sparafucile and Maddalena (Ante Jerkunica and Emily Fons respectively). Jerkunica has a bright, powerful, clear bass and Fons is ultra sexy and dynamic with a rich and meaty mezzo-soprano.

Beyond the magnificent performances is an all-around solid showing from the production team. Production designer Richard Roberts and Lighting Designer Jason Morphett have created three separate spaces with their own meaning and significance. The Duke’s place is both grand and more than a little cold where Rigoletto’s home is small and cramped but full of warmth and intimacy. Sparafucile’s bar is perfectly seedy and dingy. Both of the lower-class settings, however, always have the walls of the Duke’s home hanging oppressively above. They are both boxed in by and never able to forget the rich and powerful class that looms both literally and figuratively over them.

Thanks to the expert and clever staging by Hume, the move to modern times is not just a gimmick, it brings new light to this famous story. It is more than a little discouraging how easily this 168 year old opera translates to the present day. 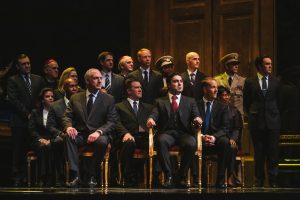 Rigoletto with music by Giuseppe Verdi, libretto by Francesco Maria Piave, based on the play Le roi s’amuse by Victor Hugo is playing at Marion Oliver McCaw Hall in Italian with English captions. They have performances through August 28, 2019. For tickets and more information, please visit https://www.seattleopera.org/rigoletto.