Isn’t it more fun when the home team wins? Sure, sports are wonderful for building strong bodies and esprit de corps, but aren’t they so much better when your team beats the daylights out of L.A., er, the other team? What does that have to do with community theater in general, or “Inspecting Carol” in particular? Only that this show was created by Daniel Sullivan in concert with The Seattle Repertory Co. In other words, the team from just 42.6 miles north of Lakewood Playhouse (per Bing Maps).

So, what’s the home team’s show all about? It has been described as “Noises Off” meets “A Christmas Carol,” and there are elements of each. But, while it borrows from other shows, “Inspecting Carol” works all on its own on two levels. It’s a fine show for the general public. But, it is a must-see for anyone who has ever been a part of community theater with all of its pitfalls and foibles. It’s about a theater that triumphs in spite of its own shortcomings, and lives to fight falling scenery another day.

Though the show is played in two acts, it really comes off in thirds. The first 2/3 is a good show, well worth the time and money of a public who should support community theater. “Come see it. You’ll have a good time.” But, it is in the last 1/3, when the show within the the show becomes a show, that this thing takes flight and becomes a hit and a half! The laughs ring from the rafters again and again as comedy, both verbal and physical, erupts from the LPH stage. “Dying is easy. Comedy is hard.” Someone may, or may not, have said that. But, the cast of “Inspecting Carol” make comedy seem second nature. That’s better than easy.

Anyone who has ever stepped on stage can tell stories of stage managers. Equal parts Mom and slavedriver, they are the hidden engine that make a show go. Brittany Griffins plays M.J. McMann, stage manager in this show. Ms. McMann has the hardest job in the world, as her charges are prone to going off on riffs of performance art that have nothing to do with the task at hand. Brittany Griffins mirrors the 1/3,1/3,1/3 of this show perfectly. She’s fine, better, and then genius! A gifted actress, Ms. Griffin is a fine physical comic, as well.

Veteran actor Jed Slaughter has appeared on this and other South Sound stages many times, but seldom as a character like Wayne Wellacre. Normally, audiences see Mr. Slaughter as a voice of reason. He’s more reserved than emotive, a counterpuncher rather than one who throws a verbal haymaker. However, in this show Mr. Slaughter lets his inner over-actor out to play. Who among us hasn’t imagined stepping into a spotlight to deliver a spot of Shakespeare, a legend in our own mind? Truly, Drama in the Hood could have watched and listened as Jed Slaughter told us about his winter of discontent all evening long. 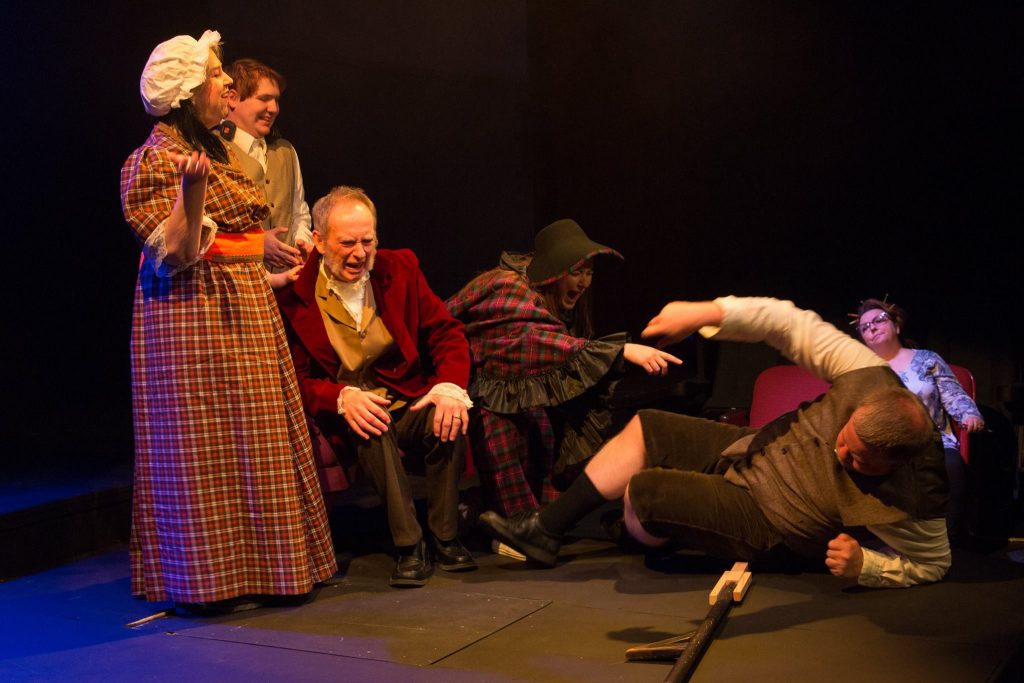 Steffanie Foster returns from an eight-year theater recess to play Zorah Bloch in this show. For some actors an eight-year hiatus means stage rust and false movements. Not so, in the case of Ms. Foster. Not only does she rock the dress nicely, her character shows the greatest range on the stage. Excellent during the serious times, as well as the comedic moments, her Zorah is both nuanced and zany. Apparently, that’s a Lithuanian thing. Who knew?

Curtis Beech and Dana Galagan are not married in real life. I checked, because they seem so suited as a long-standing couple in this show. Mr. Beech’s Sidney and Ms. Galagan’s Dorothy have some of the funnier moments in the show, perhaps because they are a bit more upstage, at least from a zaniness standpoint. Very good work from these two.

How many actors do you see on a cast list and smile, just because they are present? If you’re honest, not too many. Enter Shelleigh-Mairi Ferguson, who makes us smile every time. One of the area’s finest comedy actresses, Ms Ferguson is in her sweetest spot in this show. Her Karen is long-suffering, and Ms. Ferguson is at her performance best when she’s suffering.

Dennis Rolly returns to the scene of his early acting exploits to play “Larry” in this show. Mr. Rolly is so funny! With words and gestures that reminded some of George Carlin, he is a major reason that this show works.

My how the young ones grow up. When Drama in the Hood last saw Gunnar Rae he was Jeremy Potts opposite Summer Mays in “Chitty, Chitty, Bang, Bang.” Now, he’s all grown up!  He is also a fine young actor who was the equal of his more experienced co-actors. He’s growing in both stature and talent.

The ensemble cast of “Inspecting Carol” included Tim Hoban, Tyler Petty, and Rhoni Lozier, and they each had a shining moment or two. No mater how small the part, Mr. Sullivan wrote in a good moment. They all deserved the ovation at the end.

Veteran set designer Blake York had a crack team at his disposal and they did a good job constructing scenery that needed to be both solid and mobile, all at once. Kudos to York and his team for building what became, in essence, another performer. Aiyana Stephens and Jeffery Swiney-Weaver handled props and wigs. The set dressing was great, and Dorothy’s wig was part of the comedy.

Should you come to see this show? Certainly, and in its entirety. But, don’t be surprised if you want to come back to see the last 1/3 at least once more. That’s when a good show becomes a memorable one…whether you’re in the winter of your discontent, or even Lithuanian.