Tragic Tale dished up with large Helpings of Comedy

Produced by Map theatre, based on the real story of a chimpanzee named Travis, who was raised as a human, and had worked in Hollywood as an “actor,” the play Trevor, by Nick Jones, is a semi-fictionalized recounting of the last days of his life. Although Trevor is billed as a comedy, ultimately it is a tragedy, revealing profound truths about the selfish nature of narcissistic pet owners, as well as their parental counterparts. In spite of the tragic ending, the play is uproariously funny due to the witty script, ludicrous situation and the incredible comedic genius of Brandon Ryan, the star, who plays the adolescening champ, with all the frenetic energy of Robin Williams at his looniest.

Cleverly, the author did not have Trevor, the fictional name of the chimp, wear an ape mask, rather the costume and physicality suggested it. Trevor and his human mother, communicate in sign language, but Trevor’s thoughts are revealed to the audience in English. Like Jane Austen, Trevor is a “connoisseur of human folly” with the wit to match. Brandon Ryan, as Trevor, was up to the task, with formidable comic timing, facial expressions that made the entire audience roar with laughter and very ape-like physicality.

Act I opens in the home of Trevor and his widowed mother, Sandra, played by Teri J. Lazzara, with all the syrupy sweet maternal incompetence of a mother who seems to be reciting a “Child’s Self-Esteem” manual of the early ‘90s. The set, by Robin Macartney, comprises an open-plan living room, kitchen and study, all in the small, tight 18th and Union space. It is in this claustrophobic boundary-less space, which is a metaphor for their relationship, that the characters try to resolve the conflict which propels the plot, namely: what to do with Trevor now that he is growing up and is too strong for his deluded overly-protective mother to handle. Unfortunately, Trevor has a lot of skills, which make him a menace to the community, like the ability to drive a car.

Circling around this central conflict are several other conflicts all too familiar to the human condition. Trevor has trouble fitting into human society, expressing the conflict all humans feel: how to cope with being an individual in an organized society with rules. Trevor wants to continue to behave like a chimpanzee without the human rules He wants to do just as he pleases, react as he pleases without any filters and not suffer the consequences. Oliver, a fellow washed up actor chimp, played by Jesse Calixto, on the other hand, just wants to “pass” as a human and makes all the compromises. 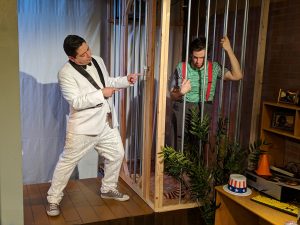 Well articulated in the play is the eternal conflict that all parents face: how to love your child, protect your child, but at the same time prepare him for adult life. In this play, Sandra is so needy that she infantilizes Trevor, that is to say her own narcissistic needs prevent her from recognizing Trevor’s needs. Like many pet owners, Sandra anthropomorphizes Trevor, and in doing so, thrusts human expectations on him, which ultimately destroy him; something one sees often in our society. 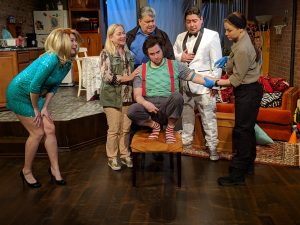 With a strong supporting cast including Michael D. Blum as a diplomatic but competent policeman, Zenaida Smith as a worried neighbor, Morgan Fairchild as a Hollywood star and Danielle Daggerty as the bewildered veterinarian, who has to deal with the whole messy situation, this show is a must see. Director, Julie Beckman assembled an excellent cast, chose an incredible script and had great supporting music by Mario Gomez. Most importantly she got the whole theatre both laughing uproariously and pondering some profound topics.

It was sold out on opening weekend, since it is tickets are “Pay what you can” it would be wise to get them asap.