Let’s play a game. I will say one word and you tell me what comes to mind. Ready?

I’ll lay odds that most of you saw a round-headed little boy with a striped shirt. Such is the lasting appeal of Charles’ Schultz “Peanuts.” From October 2, 1950, to February 13, 2000 the Peanuts gang was a de facto member of everyone’s family. We grabbed the morning paper to see what spurious advice Lucy would offer her “patients” for a nickel. We smiled over Linus’ sagacity. Of course, we wondered if Charlie Brown would ever get that kite in the air…or pitch a winning baseball game…or kick the football. The Peanuts strip still runs in syndication, though its creator passed away in 2000, at the age of seventy-seven.

“You’re a Good Man, Charlie Brown” opened as a play 52 years ago, and remains a popular community theater vehicle. Its message is deceptively simple, but there are strong truths beneath the surface. That’s what made the comic strip so popular. Federal Way’s Centerstage! Theatre opened the show this weekend. It’s an excellent night of entertainment put on by a capable cast. Director Tyler Harr made a family out of a cast of mostly newcomers to this stage, and the sense of family extends into the audience.

Cameron Waters is the only Centerstage! veteran in the cast, and he anchors the show as Charlie Brown himself. Mr. Waters has had successful runs here before, but he could have been cast for his eyes alone. They are deep and soulful, expressing the angst that is Charlie. This is a kid who is (let’s be honest) depressed as Hell, and for good reason! Yet, he soldiers on. Mr. Waters conveys the sadness and the perseverance in equal measures and is a good focal point for the show. 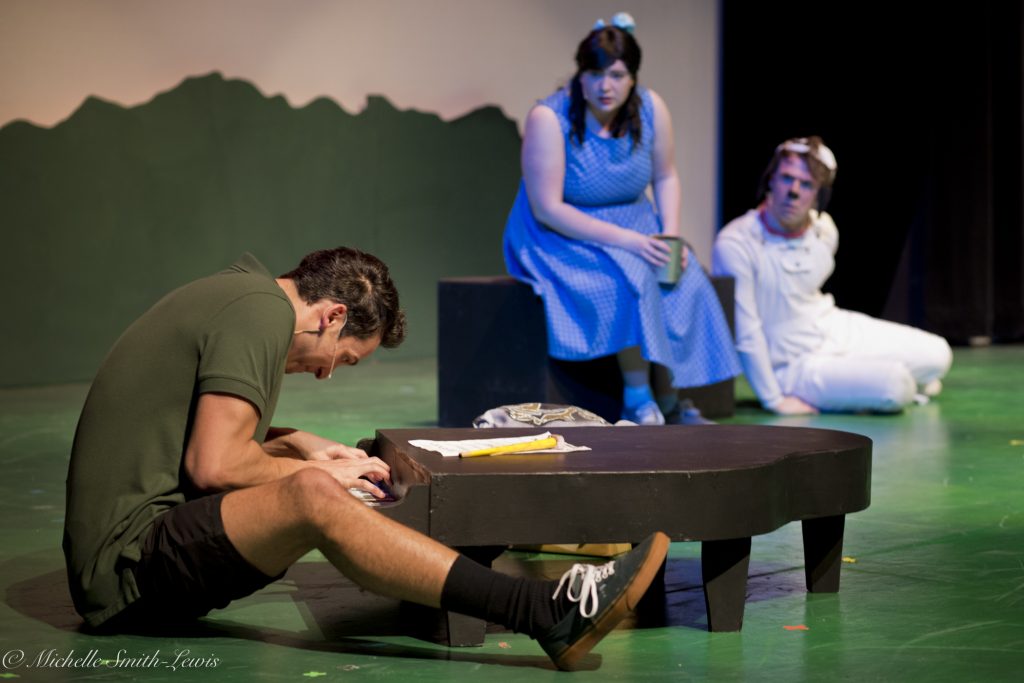 Corissa Deverse’s Lucy Van Pelt travels some over the course of the play. At first, she is woefully oblivious to the effect she’s having on people. Later, though, she makes a real effort to change. Does it work? Kinda…maybe…sorta. A veteran of the South Sound stage scene, Ms. Deverse has the chops to play Lucy introspective, as well as Lucy forming a fist one finger at a time. Corissa is a treat to watch work.

Listed as “Shroeder” in the program, but spelled “Schroeder” in the strip is Jeffery Wallace. The concert-quality pianist (without black keys if I recall) is a personage of great wisdom. Schroeder is a rock star, but with humility. Mr. Wallace’s performance as Schroeder is the best in that role that Drama in the Hood has seen. The part is not a large one, but the audience is left with the feeling that it was bigger than the line count.

Anthony Erickson’s Linus was well-played. There is a certain gravitas to the role, and Mr. Erickson displayed that trait nicely, He’s a credit to this show, but also to his educators at the brilliant Cornish College of the Arts. He handles a blanket well, too.

Charlie Brown is the headliner in the comic strip, but everyone knows that Snoopy is the star! Whether snickering at Charlie, playing ball with the gang, or flying his doghouse, Snoopy is personality plus. That makes Jake Atwood an apt actor to take on the role. Mr. Atwood can handle whatever task he is given, but he’s at his best when he puts on a hat, tips it just so, shoots his cuffs with a rifle crack, and plays the dickens out of a production number. People in the crowd who have seen Atwood before, said, “Uh, oh. Here we go,” when he donned that chapeau. Director Harr chose well for the lead Beagle.

Justine Davis is a fine actress, and her Sally Brown is an interesting character. Yet, there was something off-putting in the portrayal. The last thing a theater reviewer wants to say is that he can’t put his finger on an issue, but that is the case with this show’s Sally. Perhaps the problem lies in the ambiguity of Sally’s age. She’s Charlie Brown’s younger sister and he says, early in the show, that he’s five. (I thought the older kids in the gang were 7-8, but okay.) That makes Sally three, or so. Yet, she gets a “D” in school. If she’s school age, her speech patterns here are too young. If she’s 3-ish, the speech patterns are fine, but the grade rings false. Overthinking this? Perhaps. Ms. Davis shouldn’t read criticism of her talent, which is considerable. But, somehow, Sally didn’t completely come clear to us.

“You’re a Good Man, Charlie Brown,” is under-appreciated if seen as simply a take on a comic strip.  Charlie Brown feels unloved, and he is a bullying victim. Matters of self-esteem, hard work, the value of friendship and loyalty are all on display. It is good to see the gang come together at the end.

It is also good to see good things happening for Centerstage! Attend the show, enjoy the concessions and consider supporting this worthy theatre in its worthy cause. A little (Conrad) birdie tells us they are going to finish the season strong!