“Ibsen is like Quentin Tarantino. People either love them or hate them. There’s no middle ground.” That’s what Tacoma Little Theatre Managing Artistic Director Chris Serface had to say when talking about his latest show at his 100-year-old theater. The truth in that statement speaks to Serface’s courage in bringing “A Doll’s House” to the stage to begin the second half of the TLT season. Henrik Ibsen wrote this play in response to a real-life situation a friend of his was experiencing. In doing so, he touched on the plight women found themselves in the late-19th Century. It speaks, also, of man/woman, overlord/underling, and interpersonal relationships of all types from that day to this.

“Timeless,” is a word thrown about altogether too readily, but it applies here. Drama in the Hood happens to be a fan of Ibsen, Tarantino, and Tacoma Little Theatre, but I’m not sure it has to be the case where “A Doll’s House” is concerned. It is a deep show, couched in light banter early, and heavy drama late. It’s a character study, and an actor’s symposium in melodrama. At the end of the day, it is a classic for a reason.

Mr. and Mrs. Helmer show a happy couple face to the world. Sure, they have differences of opinion where money is concerned. He’s a saver and she’s a spender, but doesn’t every marriage have a bit of that in the relationship? All in all, Nora is a wispy, fun-loving joy boat and her husband, Torvald, keeps a steady hand on his wife’s course through the seas of life. That works, until it doesn’t. The boat runs aground when Nora commits an act of gross illegality in order to help her husband travel to warm weather to recover from an illness (spelled out as tuberculosis in the original work, but left up in the air in this production.) 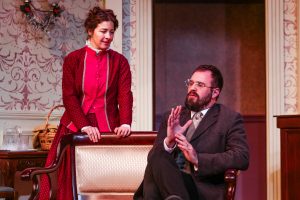 Nora lived in a time before “manic” was a thing, but she defines the term. She parents her three children in bite-sized bits of time. Who plays “hide-and-seek” to the count of five, and even then reveals her hiding place so the game can be over and the kids can be sent away with the nanny, Mom’s job complete? After all, “Mummy” must decorate a tree, prepare for a party, dance the Tarantella, hide gifts and more, all in a span of three minutes.

Anna Katica Green plays Nora, and does so with great skill. Able to be manic, distraught, and melodramatic at a moments notice, Ms. Green sets her love of complex characters out to play in this outing. She makes Nora believable from flight of dancing fancy to devastated woman on the brink of utter despair.

Sean Neely plays Torvald. Mr. Helmer is a fussbudget (an actual term from the era in which the play was written.) He fairly vibrates with his anxiety that his wife is going to ruin the family with her spendthrift ways. But, Torvald can’t have a serious conversation with his wife, because he doesn’t respect her enough to discuss a family spending plan. You see, to Torvald, Nora is a silly girl, kept happy with baubles and nicknames. Mr. Neely is a pleasure to watch work, because he truly involves both his voice, and his body into his role. Torvald isn’t an easy character to master, but Sean Neely succeeds. 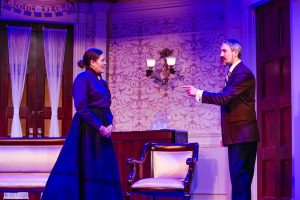 Kristen Moriarty plays Christine Linde in this show. Behind her buttoned-up appearance beats the passionate heart of a woman seeking love. Ms. Moriarty plays the buttoned-up part well, and the passionate part even better. Stage chemistry is real, and Ms. Moriarty and Jason Sharpe, playing Nils Krogstad, have it! Both Kristen Moriarty and Jason Sharpe deserve kudos for playing their parts with depth and nuance.

One gets the impression that the 1880’s were a time of repressed emotion. Perhaps the worldwide Industrial Revolution had something to do with it. At any rate, Mark Peterson’s Dr. Rank held his feelings for another man’s wife in check until it was safe to tell her. Mr. Peterson’s portrayal was good, even as his Dr. Rank was alarmingly jovial for a man whose life span was calculated in weeks rather than months or years.

Robin McGee’s Anne Marie was a treat. Her role was small but she got a lot out of it, nonetheless. She conveys with a look what lesser performers need paragraphs to put across. It was an excellent job with limited opportunity.

Patrick Gow, Nigel Kelley, and Jillian Littrell played Ivar, Bob, and Emmy respectively. They were the children that Mom saw occasionally and called it good. All of the children are building resumes’ that will serve them well on stage.

In watching this play, one gets the feeling that the audience is being led to one simple conclusion, but, there’s more at work here. This isn’t about a misunderstood saint. In fact, there are no saints here, and that’s what makes the play worth discussing on the way home. Torvald is autocratic, but Nora allowed him to be. Nora’s heart was in the right place, but the act she committed was a serious crime, worthy of time behind bars! If one wants to see a show that will make the audience think, there isn’t a better one on the South Sound stage right now. It’s that depth that makes us heartily recommend “A Doll’s House.”

Quentin Tarantino and Henrik Ibsen. Hmmm…when you have to think about a performance you just might zig when your fellow attendees are zagging. Now, that’s some fun stuff! Mr. Ibsen, and Mr. Tarantino say, “You’re welcome.”