Seattle Shakespeare is on an impressive roll: their productions now consistently feature some of the most outstanding acting found anywhere in the Northwest. A highly skilled cast is a necessity when it must handle Shakespeare’s prickly All’s Well That Ends Well. The rarely produced show is labeled a “problem play” because it features a naturalistic context in which social issues are debated. Yet Shakespeare insisted on grafting onto this framework a number of comedic elements borrowed from the ancient Italian Commedia dell’arte,  as he includes stock characters and some absurd “bed play.” That the play’s hodgepodge of elements blend into a wonderful entertainment is all due to a marvelously adept cast deftly handled by director Victor Pappas.

Keiko Green has been doing outstanding work on Puget Sound stages for some time now, but she has outdone herself with her masterful portrayal of the play’s protagonist Helena. Green overcomes the challenge of playing a character that has a nearly monomaniacal focus on pursuing a most unimpressive man. In other hands the role could easily make for an absurd characterization, but Green’s work here is consistently articulate, focused and highly effective. Green’s Helena freely acknowledges her vulnerability, for she is from a lower social status than Bertram, the man who has stolen her heart. Yet Green approaches each scene with a charming grace and wit as she steadfastly fights through the obstacles thrown her way. Thus Helena personifies the French King’s observation: 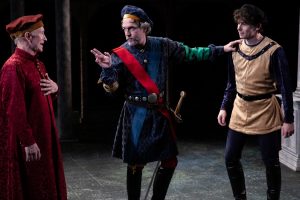 The place is dignified by the doer’s deed.

Helena is aided by a wise mentor, Bertram’s mother the Countess, here played by Suzanne Bouchard. The love the two share is one of the highlights of the production. Bouchard, who recently did stellar work as Buckingham in Seattle Shakespeare’s Richard III, again successfully portrays a highly compelling character. She is able to gently care for the put-upon Helena and also fiercely reprimand her highly flawed son. Bouchard’s naturalist approach to the Bard’s language enables her to be quite believable in both tempers.

The play is notable for featuring a number of wise and caring older characters. Helena travels from Rossillion to the court of the King of France to follow her love and also aide the ailing king with a powerful medicine her deceased father left her. Michael Winters returns to the Seattle Shakespeare stage to take on the roll of the French King. It is a joy watching him transition from a frail and ailing monarch to a powerful and intense defender of Helena. R. Hamilton Wright takes on the role of Lafew, a gentleman of the French court. Wright seems to be having a ball as his character engages in a number of witty skirmishes with Bertram and his braggart mentor Parolles. As harsh as the elder man is, Wright never loses that twinkle in his eye. It comes as no surprise that in the play’s conclusion Lafew agrees to accept Parolles as his own personal jester.

Seattle Shakespeare’s Artistic Director George Mount assumes the role of the braggart soldier Parolles, whose name fittingly means “words.” Parolles is a man of many words, all self serving and often bawdily hilarious. A sub-theme of the play involves the value of a worthy mentor. As beneficial as the Countess was for Helena, Parolles is equally disastrous in his counseling Bertram. Indeed, along with his social snobbery, Bertram’s inability to see Parolles’ true nature seems to be a major flaw. Mount enriches Parolles’ character with a depth far beyond the stock comedic foil, offering a surprising pathos by the play’s final scenes. After his character suffers a justly delivered comeuppance, he observes, “…Simply the thing I am shall make me live. There’s place and means for every man alive.”   Mount’s effective portrayal allows Parolles to echo Helena in his steadfast will to soldier on despite all.

In perhaps the play’s most challenging role, Conner Brady Neddersen plays Bertram. The shallow courtier rejects the love of Helena, even after the French King insists that he accept her as a wife. He runs off to Florence to play soldier and lecherously woos an innocent maiden (the charming Ayo Tushinde).  Bertram is finally forced to acknowledge that Parolles has been a most unworthy friend and that he indeed must assume more social responsibility in accepting his role as Helena’s husband. Neddersen’s work in these closing scenes imbues his character with a surprising grace, but can we really trust such a man? The King acknowledges the slippery qualities of love and devotion as he sums up the action with the observation “All yet seems well.” Shakespeare knows that seems isn’t as powerful a word as is.  Thus the audience leaves the theater appreciating the play’s astute observation: the web of our life is of a mingled yarn, good and ill together.

The Seattle Shakespeare team is operating in top form with this production. K.D. Schill designs the gorgeous costumes. (Parolles’ outrageous uniform is nearly worth the price of admission!) Lighting designer Andrew D. Smith does some nice work with backlighting; particularly effective in providing a warm glow for the scenes occurring in Florence—a most pleasant sensation for a mid-January Seattle audience!

All’s Well That Ends Well runs through February 3 at The Center Theatre in the Seattle Center. For ticket information call 206-733-8222 or go to seattleshakespeare.org.