The Luring Well did not Lure me in 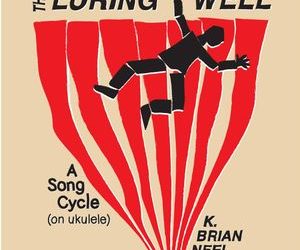 K. Brian Neel’s solo performance world premier The Luring Well, opened at 18th and Union this weekend. Termed a “Ukele Horror Song Cycle,” in which “Two Midwest kids discover a bottomless well in the woods and proceed to throw bad things into it: a feral cat, a menacing bully, a cruel teacher, a true love” had its merits but was just too ängstlich (full of angst) for me.

Having read several very bleak prison memoirs, what has always struck me was how the authors keep the readers turning the pages, by inserting humor into almost every paragraph. For example, the chapters in Nelson Mandela’s Long Walk to Freedom, dealing with his imprisonment on Robben Island were chocked full of humor, as was Schindler’s List. In The Luring Well, the depressing material, accompanied by mournful tunes, was relentless; I felt that the audience needed some comic relief.

The encore songs, which were much more upbeat, helped to redeem the show.

However, many people in the audience seemed to like the show, it just wasn’t my cup of tea.

Before the show, there is an awesome exhibition of prints by the Artistic Director’s Great-uncle Morti Gassner, in the lobby.