A multiple award winner since it was written in 1983, Larry Shue’s comedy “The Foreigner” remains popular 35 years after it was first performed. Its comedic aspects appeal to a wide-ranging audience and the serious message behind the mirth is an important one, perhaps now more than ever. Tacoma Little Theatre is celebrating its Centennial this year, opening its hallmark season this weekend with a production of this work. Drama in the Hood was there Saturday night.

Directed by Casi Pruitt, the storyline involves a man for whom the term “painfully shy” doesn’t do justice to his social inadequacy. The lengths to which this man, and his friend, go to keep him from having to engage with others is the crux of the plot.

Blake York plays the afflicted Charlie Baker. Charlie is a good sort, but without self-confidence. Mr. York plays Charlie beautifully from the top of the script to its end. His performance is a little Andy Kaufman with a touch of Robin Williams. He was excellent as the shy man who came on early, and he was hilarious as Charlie Unhinged.

Mikel Michener plays Staff Sergeant Froggy LeSeur. The Sergeant concocts the elaborate plan to keep Charlie safe and unengaged with others at the hunting lodge where the entire show takes place. A Cricket TV commercial, (but elsewhere too) says acting is reacting. Mr. Michener was comedy gold when he was reacting to Charlie’s sudden loquaciousness. A great job.

Jen Aylsworth has proven herself many times over, and often enough on this very stage. Her bio includes several favorite performances on the TLT stage. As Betty Meeks, lodge hostess, in this show she fits the bill wonderfully. Betty believes she has a special connection to Charlie so profoundly that she invents one. Ms. Aylsworth has serious comedy chops. 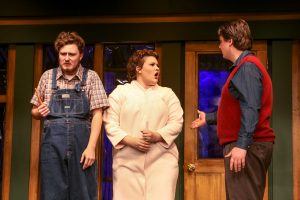 Now comes the hard part. Not every play slides neatly into a theater critic’s slot and not every role is easily reviewed. Charlie Stevens’ portrayal of mentally challenged Ellard Samms is hilarious, uncomfortably so, and expertly played. It is also wildly politically incorrect and cringeworthy. Mr. Samms mental incapabilities are played broadly and as a caricature. One would imagine that Mr. Stevens thought long and hard about tackling this role. Was it a good choice? Well, it stretched him as an actor. That’s for sure.

Caiti Burke plays Catherine Samms. Ms. Burke is another local actress with a true comic touch. She showed that in Centerstage Theatre’s “The Pajama Game” last season and she is just as effective in “The Foreigner.” Like Mikel Michener, she is strongest as a comedic counterpuncher. That’s where many of the great comic actors find their sweet spot and so it is with Ms. Burke. She’s coming into her prime as a performer.

Cody Wyld Flower plays Rev. David Marshall Lee. The clergy is uncomplicated piety-forward folks, am I right? Well, this clergyman has some complication in his makeup. The choice to unfold Rev. Lee’s darker side slowly was a good one.

Brian Cox returns to the stage after a 20-year hiatus to play Owen Musser. The world of community theater welcomes him home as his performance was loud, proud, and spot on. Mr. Musser’s belief system is skewed, but it is his belief system. Brian Cox unfolds the good, the bad, and mostly the ugly in Mr. Musser.

It is said about Tacoma Little Theatre Managing Artistic Director Chris Serface that he knows his comedy. Drama in the Hood said it! “The Foreigner” is a comedy at its finest, but it is more than that. The audience is flush-faced with mirth for much of the show, but it leaves with serious material on which to ponder. Sure, there is the business of how Ellard Simms is portrayed, but there’s more to think about than just that. The themes of friendship, loyalty, and bigotry are worth considering, and “The Foreigner” invites us to ponder them all. Consider it for an evening out. Help Tacoma Little Theatre celebrate.