The livin’ is anything but easy at Seattle Opera

“Summertime, and the livin’ is easy.”

Whether being sung by Ella Fitzgerald, Billie Holiday, Janis Joplin, Willie Nelson, or in any of the other 25,000+ recordings of “Summertime”, it only takes the opening few notes to instantly convey the languid slowness of an oppressively hot summer while the aching sadness creeps in from the periphery all hidden in the guise of a lullaby. In the current production of Porgy and Bess being put on by Seattle Opera (a co-production with the Glimmerglass Festival) the stunning Brandie Sutton as Clara brings all the colors to the opening of the opera – the sultry sweetness and barely contained grief that then weaves its way throughout this heartbreaking and fateful story. 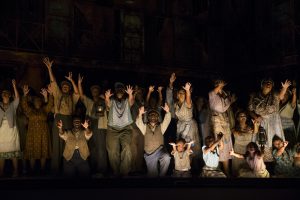 Since its premier in 1935, Porgy and Bess (with music by George Gershwin and libretto by Dubose and Dorothy Heyward and Ira Gershwin) has come to be known as the first great American opera. It tells the story of the community living on Catfish Row and the doomed couple at its heart: Porgy who is a “cripple and a beggar” and believes that his disability is God’s way of saying he is meant to live out his life alone and Bess, the “liquor guzzlin’ slut” trying desperately to overcome her addictions to “happy dust” and her barbarous lover Crown. Though our titular characters are absolutely the relationship that drives the action, the onstage world is rich with a myriad of individuals; each with their own struggles, tragedies, and dreams. There is the young couple with a new baby grappling with dangerous waters both literal and figurative, the widow who finds solace in her religion as she tries to make sense of a life without her husband, and the matriarch of the neighborhood trying to keep everyone safe from outside demons determined to infiltrate the insular community. 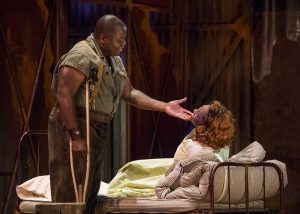 Though the Gershwins and the DuBoses have provided complex and dynamic characters, it takes some serious talent to carry them out and Seattle Opera has provided us with just that. As the earnest and stalwart Porgy, Alfred Walker (sung on alternate performances by Kevin Short) brings a vibrant and clear bass-baritone and sweet nature which comes through even with the very challenging physicality inherent in the role. Angel Blue as Bess (alternately Elizabeth Llewellyn) takes complete charge of the stage from her first entrance. She has a formidable soprano that demands to be heard. Mary Elizabeth Williams is reprising her role as the grieving widow Serena and delivers a show-stopping performance. Her rendition of “My man’s gone now” is full of power and anguish and is literally breathtaking. 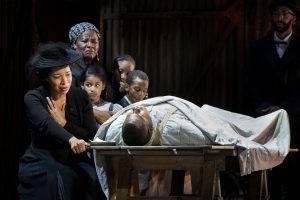 On the less noble side of the story we have Lester Lynch as the possessive Crown and Jermaine Smith as the drug dealer Sportin’ Life. Lynch sings the role ably but takes the part of villain dangerously close to mustache-twirling melodrama territory. Smith (also reprising his role) has spent most of his career playing this slimy snake and it is immediately obvious why. He brings the perfect mix of operatic tenor and a jazzy gospel sound. Smith has a dazzling physicality as a body constantly in motion. 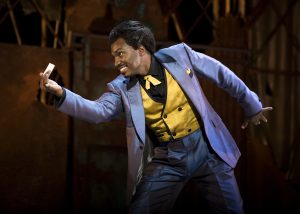 All of the performances of the principles are fantastic. In this production, however, the true star of the show is the ensemble. They were brilliantly staged by Garnett Bruce and choreographed by Eric Sean Fogel. Each member of the chorus has a clear and vivid personality. At any point the ensemble is onstage (which is a lot) you could follow any one of them to see a whole different story being played out in the background. When the diverse voices come together in the big ensemble numbers it is absolutely spectacular (special shout-out to Chorusmaster John Keene). While the blocking and choreography of the chorus has a strong focus, some of the smaller two or three person scenes lack clarity and are, at times, awkward or clumsy.

For this production, Seattle Opera has brought together a robust orchestra under the masterful baton of John DeMain. This is DeMain’s fourth production of Porgy and Bess at SO and his deep understanding of this score is instantly obvious. The beautiful set, designed by Peter J. Davison, is not a literal interpretation of a neighborhood in Charleston, South Carolina but it is representative of a street neglected by the world. There are parts of the walls that seem torn away like a fading memory or forgotten picture just like the one depicted on the scrim that covers the stage at the opera’s opening. The costumes, designed by Tony Award Winner Paul Tazewell, are not only incredibly beautiful but help to illustrate the different worlds colliding onstage with Bess’s bright red dress or Sportin’ Life’s flashy suits put up against the muted tones of the Catfish Row denizens. 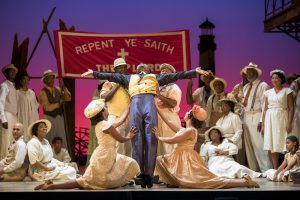