Based on the book by Larry L. King and Peter Masterson, “The Best Little Whorehouse in Texas” became a hit movie in 1982. Of course, in 1982 anything Burt Reynolds and Dolly Parton touched would have turned to gold. Beyond the two main stars, though, the movie threaded poignancy and relationship into a couple of hours worth of rollicking Texas cowboy hat fun. This weekend, Paradise Theatre in Gig Harbor donned its chaps and, with a hearty “YEE-HAW”, opened “The Best Little Whorehouse in Texas” on its Judson Avenue stage. The result was two shows in one. 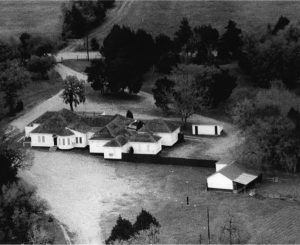 The Chicken Ranch (a real place, by the way) is one of the stars of the show. At the Ranch, men of all societal statuses came for a good time and a little cuddlin’, y’all. The Ranch survives under a wink and nod relationship with local law enforcement and a “don’t ask, don’t tell” arrangement with the Governor’s office. Everyone is satisfied with the status quo until they aren’t. Therein lies the plot.

Troy Turnley is the director of this show, and he helps the mood along by prowling the lobby in costume. Of course, that’s a Paradise Theatre tradition. No other theater in the South Sound so integrates the actors with the crowds pre-show. Actually, it is a good reason to arrive early. Paradise starts the fun well before the house lights dim.

Once the show gets underway the crowd is treated to two distinct plays. Why do we say that? Because the first half is nearly non-stop fun and hi-jinks. Save for one portion devoted to a domestic violence issue this show appears to be a comedic offering, perfect for a warm Friday in August. It plays well in that genre. The choreography, under the expert direction of Brittany Hess, is fine. The singing, directed by Meredith Shanley, ranges from okay to really good. Paradise Theatre physical comedy legend Eli Ghorley shows off his umpteenth new strut of the 2017/18 theater season. It’s one solid hour of a hootenanny, with sexual overtones! What could be better than that?

The Chicken Ranch is operated by Miss Mona, played by Lesley Niemi. The iconic “hooker with a heart of gold” could have started with Miss Mona, who loves her girls and carries a torch for the local sheriff with an equal amount of ardor. Ms. Niemi played the first act well but broke the hearts of everyone present in Act Two. Her achingly accurate rendition of “Bus From Amarillo” (pronounced “Amarilla” in the song, because Texas) spoke to the heartbreak that can come to those who truly love. Ms. Niemi’s second act is, without a doubt, the best part of this show.

Who is this man so loved by Mona? Sheriff Ed Earl cares about Mona, but can he ultimately pass the test he doesn’t know he is taking? That’s what the audience leans forward to find out during the show’s closing moments. “Come on, Ed, you big buffoon! Recall is your friend and, ultimately, your destiny” We won’t spoil the ending, but we can report that Ian Lamberton plays an excellent Ed Earl in this show. Mr. Lamberton has an easy touch for roles such as this one. He operates on the line between comedy and pathos very well. It was that way in last year’s “Curtains” on this stage, and he was equally good in this show.

Miss Mona’s aide de camp is Jewel, played by Courtney Turnley. It must have been easy for Director Troy to cast Jewel when he had such a fine actress looking at him across the breakfast table. Courtney Turnley has yet to find a role on this stage that she can’t nail. She was a great Grecian urn in “The Music Man” but Jewel is a finer drawn character and Ms. Turnley is up to the challenge. Another great job by a Paradise regular.

Chelsea Pedro’s character grows throughout this show. When first we see her, she’s hiding from a bad situation. It’s the most dramatic scene in the first act. But, like so many in this production, it is the post-intermission piece that brings out the best in this fine actress. As Angel, she leads the girls in the ranch from despair into hope with her tuneful rendition of “Hard Candy Christmas” Ms. Pedro has been filling in all the boxes in her theater resume’. She should remember “Angel” as the role in which she came into her own.

Two folks, in smaller parts, should come in for a mention, as well. Olivia Dilling is just starting out in her Mainstage career, even though she has been acting for five years. Her portrayal of “Shy” showed range and depth of character. Sharon Gregory, as Doatsy Mae, caught our eye as well. Her self-titled song in the first act gave that part of the show some much-needed poignancy and nuance.

Paradise Theatre is one of Drama in the Hood’s favorite places, run by some of the finest and most dedicated theater folks around. The crowd Opening Night wasn’t great, but we understand that theater in August can be a hard sell. There are plenty of seats available for the rest of the run of this two shows in one production. Make plans to attend. Make plans also, to support Paradise Theatre in its drive to survive. Paradise Theatre is facing rent increases that put its very existence in question. It’s a good theater that is only getting better. Let’s join hands and keep the lights on. No one wants to see Paradise Theatre catch that bus from Amarilla’.