‘Peter and the Starcatcher’ Glimmers at Lakewood Playhouse

The story of Peter Pan is a well-remembered one spanning over 11 decades. In fact, J.M. Barrie introduced Peter as a baby in an adult novel released at the turn of the 19th Century. Soon, Peter starred in his own book. As the forever young Boy Who Could Fly he embodies fun and freedom for young folks everywhere. Since making his literary debut, Peter is the titular role in no fewer than five movies, as well as three movie adaptations. Most recently he showed up in the Warner Brothers 2015 work titled “Pan.” That was only part of the story, though. Looking at the legend of Peter Pan in a wholly new way than the movies, Lakewood Playhouse opened “Peter and the Starcatcher” this weekend.

It took the delightfully twisted mind of humorist/novelist Dave Barry to engineer Peter before Pan and the Captain before Hook. In Rick Elice’s “Peter and the Starcatcher,” from Barry’s book, we learn their origin. Moreover, we are treated to girl power and its essential nature, classic swashbuckling and high seas romance. This isn’t the first time Peter and the Starcatcher has made its way to a South Sound theater this year, but it is the first time the story has been told through a decidedly Monty Python lens. Fun, frolic and a surprisingly pathos-inducing final stanza. All toward a good night with community theater. Drama in the Hood was there.

On one hand, “Peter and the Starcatcher” with a Python-esque” twist ought not to be a surprise. Lakewood Playhouse Managing Artistic Director John Munn directs this show. Mr. Munn’s comedies often take on the feeling of Python humor. It was a good choice by Munn to contrast this “Peter” with the one earlier produced by Bainbridge Performing Arts. Where the first Peter was a lusher production, the Lakewood Playhouse show was much the funnier with twice the wackiness. Veteran theater-goers know when a cast is having a good time, and the cast of Lakewood’s “Peter and the Starcatcher” is having as good a time on stage as any cast of any show in recent memory. 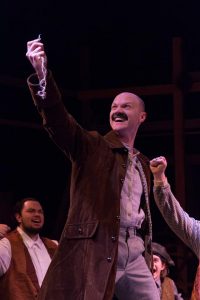 (L to R) KYLE SINCLAIR (Black Stache) from the Lakewood Playhouse Production of “PETER & THE STARCATCHER” Photos by Tim Johnston.

A great deal of the credit for the good time the cast (and the audience) has is due to Kyle Sinclair. He was across the pond recently, being waited for as the titular character in “Waiting for Godot.” No one need wait for Mr. Sinclair’s Black Stache in this show. He’s out front from the beginning, winning his way onto the audience’s funny bone with his voice, his dialogue, and his rubber body. Kyle Sinclair has been on this stage before (and always successfully), but never with the comedic verve that he displays in this show. He puts the buckle in swash, and agony into the significant injury his character suffers toward the show’s end. Wild kudos to Kyle Sinclair.

Black Stache isn’t anything but a common pirate without his antagonist. Enter, Emily Cohen as “Boy.” Her characterization is beautiful. Peter Pan was a textbook example of whimsical long before he became the Boy Who Could Fly. Ms. Cohen finds the whimsy in Boy and displays it wondrously to the audience. In her bio, Emily Cohen says “Our lives are an awfully big adventure.” She is one of the main reasons why this adventure works so well. She also choreographed the stage combat which was at times breathtaking. A pirate story needs good brawling and this cast fights with gusto. It is to Ms. Cohen’s credit that no one gets decapitated!

Making his return to the Lakewood Playhouse stage after a 35-year absence is Martin Larson in the dual roles of Mrs. Bumbrake and Teacher. Shame on you, Mr. Larson! What took you so long to come back? He’s brilliant in the small role of Teacher, but Martin Larson blows the lid off the joint as Mrs. Bumbrake! Nothing is too over-the-top in this show and it is Martin Larson who gleefully carries the show over the edge. In a show with plenty of laughs, Larson draws the loudest, longest, and most side-splitting. The best comic actors complete their task with minimal words. Martin Larson can convey his humor with a tilt of the head.

Chap Wolff plays Black Stache’s sidekick, Smee. Solid throughout, Mr. Wolff’s best moments in this show are when he reacts to Black Stache. Mr. Wolff is a talented stage counter-puncher. It isn’t something everyone can do.

W. Scott Pinkston was noteworthy on this stage earlier this season when he played dual roles in A Christmas Carol. Nothing in those roles prepared him to canoodle with  Mr. Larson’s Cockney-drawling Mrs. Bumbrake. Actually, nothing Pinkston could have done on stage would have prepared him for his part opposite Martin Larson’s distaff alter ego. However, he dives into the role of Alf like the professional he is. They make a lovely couple…NOT. But, they make some great stage memories for themselves and everyone who sees them in this show.

Tony L. Williams is a local favorite, frequently tending his craft here in Lakewood and on other local stages. His growth as a performer is a joy to behold. As Bill Slank, Williams is suitably pirate and as Hawking Clam, he is an effective offspring and valuable helper to Fighting Prawn.

Speaking of whom, what a great job by Nigel Kelley! His star began to shine in “Alice in Wonderland,” earlier this season. It shines with increasing intensity after Opening Night of “Peter and the Starcatcher.” He has a lot of lines and he says them with conviction and talent. His stage presence is great and he holds is own with actors many times as experienced as is he. This young man will lead shows if he desires to do so. For now, though, Prawn On, Mr. Kelley!

A great cast can be rendered impotent without a good crew and this show has a fine crew. Blake York’s scenic design is understated but beautifully rendered. Kudos also to the lighting team of Jacob Viramontes and  Joy Ghigleri. There are some intricate lighting cues in this show, beautifully realized and on Opening Night at that. Naarah McDonald’s costumes were spot on and the set was well-dressed by Karrie Morrison.

There is precious little to criticize in this fine show. Perhaps, the audience would have been satisfied with two examples of flatulence toward Queen Victoria (God Save Her!), rather than the three they experienced.

One thing that CANNOT be criticized this outing are the cast headshots in the program. Lakewood Playhouse cares a great deal for their casts and the improved picture quality is welcomed and worthy of note. Local actors can be proud to put their mugs in an LPH program.

In a world in which the local news is harrowing and the national news is cringeworthy, a good story is welcome. “Peter and the Starcatcher” is a very good story, told by an extremely talented cast. Make plans to see it before you run out of time. The best shows in this theater sell out, and this is one of them.