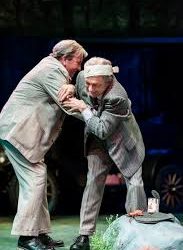 Rob Burgess as Edison and David Pichette as Ford. Photo by Robert Wade
Past

Taproot Offers a Joyous Outing in Camping with Henry and Tom

Recently, Taproot Theatre has placed a number of historical big shots on its stage: Albert Einstein was featured in Relativity and Abe Lincoln, Grant and Lee in A Civil War Christmas. The troupe has outdone itself with its latest production, Camping with Henry and Tom. Playwright Mark St. Germain bases his “what if?” premise on an actual event: Henry Ford, Thomas Edison and President Harding really did go on a much publicized camping trip in the Blue Ridge Mountains in 1921. In actuality, press and family surrounded them throughout the event. Germain imagines the trio off on their own and suffering a car crash with a deer in the middle of the forest. What if these three famous Americans were stranded with each other for a patch of time? The outcome here provides for a wonderfully entertaining evening of dramatic, insightful and often hilarious conversations presented by three skilled actors at the top of their game.