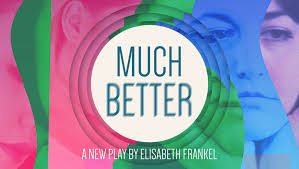 Much Better is a new play by Elisabeth Frankel. It premiered last night at Capitol Hill’s, 12th Ave Arts Studio Theatre. The play was organized by the Really-Really Theatre Group. Even though this performance was the play’s premiere Much Better has already been noticed. Much Better was a contender at this year’s ONeill National Playwrights Conference.

Elisabeth Frankel is a dynamic young playwright who’s already got a few plays under her wings. Apart from her current play, Much Better, she’s written a play called Progeny based on Mary Shelley’s life and A Snow Leopard in Central Park, a coming of age story focused on two East Harlem teenagers, as well as several other equally diverse plays. It appears that Elisabeth Frankel aims to explore the many facets of humanity that span across time. Much Better is no exception.

We all have some parts of our personality that we would like to improve upon or possibly even change. Much Better, set in the future, takes this human desire for self-improvement to another level. Unlike in our current times where personality alteration is achieved via drug regimes, Frankel’s play explores the possibility of more permanently altering one’s personality via brain changes. The brain changing treatment is called Neuroclear. Like the name suggests, the treatment doesn’t just mask any undesirable personality traits, the treatment erases them. As Dr. Keith explains to the main character Ashley, the treatment is like “plastic surgery for the personality.”

The character with the troubling personality is Ashley. She is performed with focus and flair by Alysha Curry. Ashley has trouble reigning in her emotions. Every interaction in her day no matter how insignificant or large manages to heighten Ashley’s emotions to a painful level. When her train halts on the line for a moment, Ashley imagines terrorists boarding the train to hunt her down. Later at work Ashley, hyperventilates over the case study she is supposed to process. Her lack of calm means that her coworker Morgan must step in and perform Ashley’s job on her behalf. Eventually Ashley seeks help for her condition. Dr. Keith, played serenely and confidently by Lamar Legend, diagnoses Ashley as being hyperempathetic. As Ashley undergoes the Neuroclear treatment her personality does indeed change. Other people around Ashley change too. Her best friend and work colleague Morgan admits that even though she can function in life more easily than Ashley did, Morgan still wishes to alter her own faulty personality traits such as her niggling jealousy. Everyone’s doubts and fears bubble to the surface. 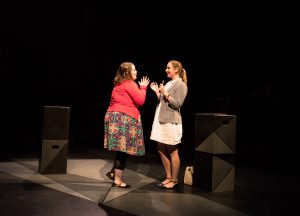 Ashley’s teenage crush, played with energy and sensitivity by Nick Ferrucci, admits that his life is dull and that he operates on auto-pilot most of the time. The doctor admits that not only did he undergo Neuroclear to alter his highly-introverted personality but he underwent plastic surgery to match his physical self with his inner self. A guy (played by Garrison Whaley-Sharp) who presents a testimonial on the merits of Neuroclear to Ashley admits that his main gripe was his loneliness. Obviously, everyone has problems. One of the main questions this play poses is this: is the ability to alter people’s personality for the benefit of people’s happiness or simply to create a calmer, more malleable society? Also, if you erase someone’s personality traits (undesirable or otherwise) have you effectively erased the humanity in that person? 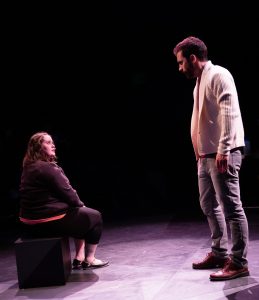 I won’t reveal the play’s final angle on these issues. However, I will say that less can be more. By the play’s end one of the main messages was hammered home too obviously. The actors were all very powerful and effective in their character portrayals. Rather than a literal message, the actors’ power was enough for me.

This play is well acted, strongly scripted and the structure was well managed. The actors made good use of their space. A yoga class near the 2nd half of the play worked well on many levels. It contrasted both the visceral changes in Ashley and gave a platform for Morgan’s self- realization. While Ashley is floating in a joyful utopian state, Morgan angrily proclaims that erasing negative emotions is not the way to go. As Morgan states, “people’s emotions are the currency of the soul.” The actors were well supported.

I would like to praise not just the stage designers and lighting designer but also the sound designers. Sound was another strong character in this play. Adding an extra dimension, the sound effects enveloped the audience and made us closer to the character’s state of mind. Thank you also to Henry Nettleton, the director for giving us such a though provoking rendition of this play. Much Better is a timely play that focuses on enduring human concerns. We all want to be better more successful people but at what price?

Caught Captivates Quickly, but Can’t Quite Hold On
March 11, 2019
© 2021 Drama in the Hood. All rights reserved.
Site Design