Shakespeare in the Park: Pericles 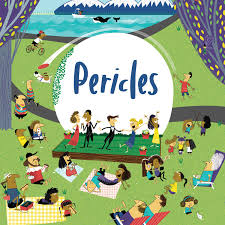 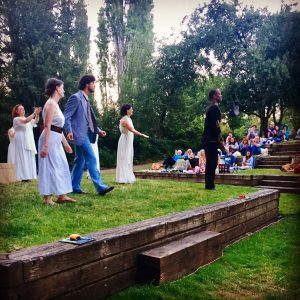 Shakespeare’s Pericles in the park was not what I expected and that turned out to be a good thing. Having never read Pericles, I cheated and read the cliff-notes version. This is one of Shakespeare’s more obscure plays and the plot has the quality of a telenovela with all the outlandish side stories, plot twists, jealous and virtuous women, and of course mistaken identities. I was apprehensive as the play unfolded, afraid I would not be able to follow along with the Shakespearean dialogue. Fortunately, as the play progressed, I stopped taking it so seriously because the actors didn’t take themselves too seriously. And then the play became really fun.

The condensed play starts out with the king of Antioch trying to find a suitor for his daughter, with whom he is having sexual relations. Pericles, who is the king of Tyre in a disguise, attempts to ask for her hand in marriage and inadvertently learns of the sexual relationship between King Antiochus and his daughter. Pericles now has a death sentence on his head. In his attempt to escape, he finds himself shipwrecked near Pentapolis. He is encouraged to enter a tournament to win the hand of another king’s daughter, Princess Thaisa. Of course he wins the battle and marries Thaisa.  His identity is soon revealed and he must make his way back to Tyre with his now pregnant wife. On the ship ride there, Thaisa “dies” giving birth to their daughter, Marina. Her body is stuffed inside a chest and thrown overboard. In grief, Pericles gives Marina into the care of his friend Dionyza. As Marina grows, Dionyza becomes jealous of her beauty which distracts suitors away from her own daughter. Dionyza sets up an opportunity to have Marina killed but instead Marina is captured by pirates who wants to prostitute her. The virtuous Marina manages to convince her captors that she would be more useful as a seamstress and even manages to convert a client, the governor Lysimicus, into a virtuous man. Meanwhile, Dionyza informs Pericles of Marina’s death and Pericles goes into decades of mourning. The governor, learning about Pericles, decides to send Marina to cheer him up. When Pericles sees Marina and her resemblance to her mother, father and daughter are finally reunited. The goddess Diana informs Pericles and Marina in a dream that Thaisa is still alive in Ephesus. The play ends with the family finally reunited and with the addition of the governor Lysimicus as Marina’s fiancé. The gods have granted the family’s reunion because through all the darkness they have endured and witnessed they have managed to remain virtuous, unlike others who were ultimately punished. A happy ending for all the deserving.

One benefit of putting on an obscure play like Pericles is the creative freedom afforded to the director and the cast. There are few comparisons to other versions, which allow creativity and fun to flourish. The play begins with the actors in white togas and garments of the ancient Greeks and Romans. But as it progresses, the actors come out in penguin suits and flapper dresses, and suddenly we are no longer following the formal script. For example, in the party scene, where Pericles and Thaisa fall in love, a songstress unexpectedly belts out “Someone to Watch Over Me”, which will become the family’s theme song. The cast, in their 1920s attire surrounds the couple and then dances a number in the style of a 1950s Hollywood musical. The next unexpected costume change occurs during the capture of Marina where the cast comes out dressed in bell bottoms, bright floral prints, and with garlands of flowers in their hair. Suddenly it is the 1960s! Throughout all this, the virtuous Marina is dressed like a 19th century school teacher. And yet somehow it all works! The 60s mood matches the sly and hedonistic personalities of Marina’s captors who provide a lot of comic relief, most especially David Pichette. In that scene, he plays the sly and wormy Boult who fittingly ends his sentences with a hiss. Another comedic element is his attire which consists of exercise shorts, tank top, knee high socks, and sneakers in the style of exercise guru Richard Simmons. What a sight!

The diverse cast consists of a mix of veteran and novice Shakespearean actors. Veterans such as David Pichette (King Antiochus, King Simonides, and Boult) and Tracy Hyland (Thaisa) are distinguishable by their delivery and command of Shakespearean dialogue. While younger actors such as Lorenzo Roberts (Pericles) and Arjun Pande (Lysimicus) have less command and stage presence, their enthusiasm lends a charm to their performances. Mr. Roberts’ eyes has a constant look of wonder throughout the play, even in the sad scenes. By the end of the play his eyes are so bewildered, that in itself becomes comic relief. The cast’s joy and gratitude to be able to do what they do translates across to the audience. This is probably the best reason to go and see Pericles. Plus, it’s free!

Pericles, directed by Annie Lareau, goes through the 6th of August. For future shows at the location nearest you, check here: http://www.seattleshakespeare.org/shows/pericles-2017/

Read other reviews by L.H. Wong