If you have ever wondered why King Henry VIII of England was so obsessed with having a legitimate male heir, read the Shakespearean plays set during the during the War of the Roses. Shakespeare’s rendering of the end of these dynastic wars, when two rival branches of the royal family, the Yorks and the Lancasters, fought endlessly for the disputed crown of England, opened this weekend at Theater off Jackson. Produced by Rebatensemble Theatre Group, director Elizabeth Wu, staged Richard III in Chinatown in the 1920’s, with the Yorks and Lancasters, as rival gangs of speakeasy owners i.e. gangsters.

N.B. Although the program notes say the play was set in the 1930’s, when liquor was legal, judging by the costumes and choreography as well as date of the repeal of Prohibition, (1933) I would say that it took place in the 1920’s, before the 1929 stock-market crash.

Since the 1920’s was a time of gang warfare, moral corruption, unbridled ambition, family betrayals and general thuggery, the concept was perfect. Also, Wu strategically used racial stereotyping in casting. For example, the upstart Richard, to facilitate his ambition to become king, marries the daughter of the “King Maker” the Earl of Warwick, to reflect the connection between power and white skin, Wu cast a blonde white woman, as Lady Anne, Richard’s wife.

Elizabeth Wu’s coherent direction and creativity with the text, was one of the strengths of this amazing production, another was the sound design and live music. Ella FitzGerald was broadcast as pre-show music and the opening scene was an upbeat jazz number with flappers dancing and energetic trumpets playing. 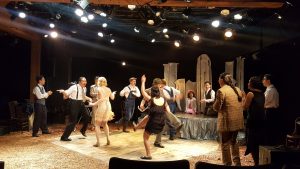 Well-chosen music was used throughout the show to accent what was happening on stage, at one point the violence on stage was lightened by playing “Take the A Train”, in another scene about betrayal, the great aria from Madame Butterfly came over the radio on the stage. To great effect, the music alternated between African American Jazz and Chinese music. Brian Dang, the sound designer, certainly deserves a great deal of credit for the success of this production. Live singing by Camrynne Sullivan and Danela Butler added a real touch of authenticity in the “nightclub.” 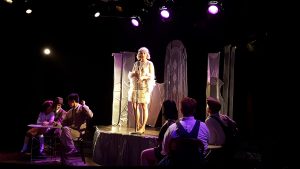 As Richard III, one of the Shakespeare’s great villains, Tom Dang carried the show, he played a loathsome, manipulative, shameless creep to perfection, all the while engaging the audience in his ambitious schemes. His ability to express anger, cunning and cruelty without shouting or alienating the audience is to be commended. 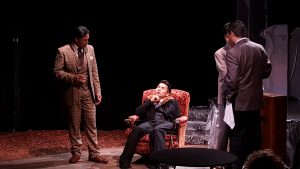 Aimee Decker as Queen Margaret-the mad Queen also stood out, playing an eccentric, passionate tragic character, who could be understood in the back row.

Unfortunately, except for Buddy Todd and Cameron Duckett, who played minor roles, the rest of the cast, who actually were decent actors, had diction/enunciation problems of various degrees. One actor, basically could not be heard except when she shouted, and others just did not enunciate clearly, so that a lot of lines were incomprehensible. In the case of Maquis Hill, it was quite a shame, because otherwise he put in an excellent performance.

However, that being said, this was a fascinating production. The concept was inspired, the directorial choices were spot-on and I heartily recommend it. Hopefully, this company and director will produce more Shakespeare plays like this. For the audience, I would say it might help to read a synopsis of the plot. Shakespeare assumed his audience knew all three parts of the Henry VI plays, the prequels, as well as the convoluted history.