As Seattle skylines are awash with pearly pink cherry blossoms, it’s a good time to consider how hard it is to break from stereotype. Nadeshiko, an original play by Seattle based playwright, Keiko Green, seeks to expose and question ongoing assumptions about Asian women. Asian women are too often fetishized as feminine delicacies. As delicate as the Nadeshiko of the play’s title. Nadeshiko refers to a beautiful and delicate Japanese flower. This flower has come to symbolize the idealized Japanese woman and by extension other Asian women. Who hasn’t come across the stereotype of Asian woman as graceful, pretty, submissive and always at your service? These ideas and more are explored in Keiko Green’s new play. 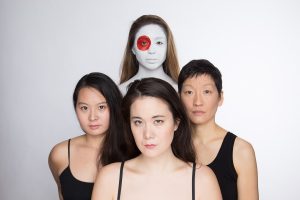 Keiko Green’s play Nadeshiko premiered last night at the Center Theatre in the Seattle Center. It was an artful weaving together of multiple stories across time. The actors were all very professional and endearing. Opening the play, we witnessed a wealthy white male with an über neutral apartment, spotlessly clean and graced by a single piece of grandiose art. This man known as White Haired Man (played by Greg Lyle-Newton), has hired a woman off Craig’s list. Importantly for this play, the woman is young, beautiful and Asian. We soon discovered that this woman known as Risa (played by Maile Wong), was there to earn money by virtue of her simply being Asian. 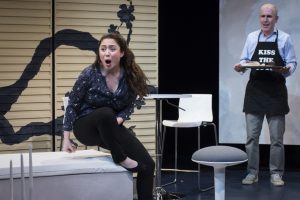 Risa appealed to the white man’s fetish for what he saw as Asian erotica. Her task: to read from a novel to him naked, no physical sex involved, he just wanted to look. While the exchange between the man and Risa didn’t go as planned, their relationship took an unexpected turn. While we never quite found out the truth about the white guy’s motivations in life, we did discover that stereotypes can cut both ways. It’s telling that just as much as Risa was stereotyped, she too had prejudices about this guy’s life that she needed to unpack. Watch out for some hair-raising and emotional scenes between Risa and the white guy.

Guiding us through the various phases of this play was a ghostly guide of sorts. An elderly Japanese woman, bearing the name of the play’s title. As Nadeshiko, she interacted with the audience; explained the concept of Nadeshiko and kept the sometimes-serious atmosphere lighthearted with her quirky quips, her unexpected ghostly interludes and humorous use of sound effects.

Talking about the stage production; it was very professional. The lighting was put to effective use and the sound was always spot on. A large screen (which doubled as a piece of art), was used throughout the play in multiple ways. The screen showed historical footage to create atmosphere but also to broadcast modern footage about Asian women resisting their stereotype. The screen was also used successfully as a giant sex webcam for Risa. 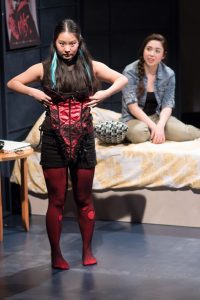 Sue explains to Risa tips on being a cam girl. Photo courtesy of John Cornicello.

Not only did we meet Risa: trying but humorously failing to make money off her Asian-ness, but we were introduced to her cousin Sue. Sue (played by Mi Kang) was a lot more pragmatic about exploiting her assets. As a counter to Risa, Sue illustrated how Asian sexual stereotypes could be used to make money from the very people stereotyping you. Street- smart Sue gave Risa a funny tutorial about sex camming on the web. As Sue stated, if I’m going to get stared at, I should make some money out of it.

Looking back in time to 1945 Japan, the play bought in the historical concept about the Nadeshiko woman. During the war, a Japanese kamikaze pilot called Toshio (played by Josh Kenji) is comforted by a volunteer Nadeshiko woman. Her job was simply to exude feminine grace and beauty through her attention and kindness to this soldier as he waited for his final sortie. The Nadeshiko woman played also by Mi Kang wore the quintessential Japanese schoolgirl look. With long braids and a navy and white sailor’s suit Shoko told the soldier, “we’re the flowers, we’re here for morale.” Asian women; always in a support role, never allowed to fully express their real feelings and always carrying the burden for others. After the fighter planes left with their fated pilots, Shoko was left to reflect on her loss. In one of the most moving scenes of the play, Shoko showed real heartfelt sadness. 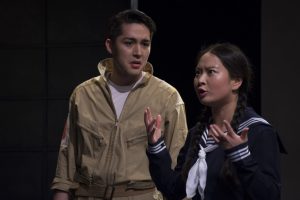 These scenes and many others were drawn together by the play’s ghostly narrator. As a final message Nadeshiko tells the women of the play, “it is not your weight to carry…you can be free of this burden.” Stereotypes can be manipulated by both sides and ultimately their damage and the pressure they unfairly place on humans are never worth it.

Fortunately, this play is definitely worth seeing. While running for 2 ½ hours long was a little lengthy, there was a 15 minutes’ intermission and the great acting and variety of drama made it worthwhile. Nadeshiko, by Keiko Green, directed by Kaytlin McIntyre,  Sound Theatre Company, Seattle Center Theater, 300 Harrison St, Seattle Center, 98101. APRIL 13- MAY 7, 2017   7:30 PM and a Sunday matinee. Tickets $15-$25.  http://www.soundtheatrecompany.org/2017-season/nadeshiko/?gclid=CM_uus7rqdMCFcVlfgod19wNQg