What do you get when you combine a story of family, grief and an ivory-billed woodpecker? One hell of a production.

Seattle Native, Katie Forgette, unveils her new drama, Evidence of Things Unseen, at the Taproot Theatre Company. Best known for her Seattle Repertory Theatre work, Forgette brings us a heart wrenching story about family and faith that is sure to touch audience members in an unimaginable way.

One of the most important things a theatre production can do is affect you in such a way that you are forced to continue thinking about the play long after it’s over. This is something not easily achieved, but Evidence of Things Unseen is definitely one of those shows.

Aside from Forgette’s script, which is nothing short of brilliant, the cast succeeds in drawing you in and making you really pay attention to what is happening.

The play focuses on the rocky relationship between sisters, Abigail (Christine Marie Brown) and Jane (Jenny Vaughn Hall), as they struggle with opposing views and caring for their bird loving father, Jack (Michael Winters.) Anyone with siblings will be able to see parts of their own relationships reflected on stage through the characters of Abigail and Jane. Although the first argument they share doesn’t seem as authentic due to the overly loud yelling they do, as the play progresses, their characters become extremely believable to the point where you feel as if you actually know them. 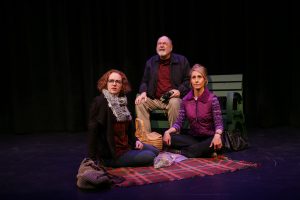 Brown and Hall are talented actors and this production certainly shows off their wide range of skills. Abigail and Jane’s father, Jack, is such a lovable character and Winters portrays him so well that as an audience member, you can’t help but hope and pray he’s actually seen the famous ivory-billed woodpecker or that ducks will  show up in the pond for once. These three actors work so well together in bringing to life a realistic family along with Daniel (Chip Wood) who is a wonderful asset to this play.

One of the best parts of this production is the humor. Yes, there’s heartbreak and grief, but humor is laced throughout the entire play in a way that doesn’t take away from the heavy subjects such as alcoholism and suicide, but instead it serves to humanize these characters. By including humor, Forgette was able to show just how multi-dimensional each character is. No one is characterized by just one distinct trait and it’s important to note what an important role humor plays in achieving this.  Furthermore, the humor is executed so well and there is no doubt that you will find yourself laughing on multiple occasions.

Besides the humor, Evidence of Things Unseen, brings to light many social issues that often aren’t discussed as much as they should be. An important issue is that of faith which is something all the characters deal with in their own way. While Jane is very religious, Abigail isn’t and that often leads to disagreements between the two – especially when it comes to their father. However, their ability to eventually be able to understand their differences and come to peace with them is something everyone should strive to do and not just with faith, but with a variety of issues. Jack’s character speaks on the issue of ageism when he says, “The feeling of being invisible in a room full of young people.” This speaks volumes to what many older people face on a daily basis and forces you to look within yourself to see if you’re guilty of adding to this problem.

By including these social issues, Forgette is able to accurately reflect society back to us and that’s one of the most important things theatre can do.