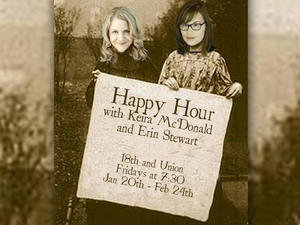 The sketches started with an imitation of aging Shelly Winters, played by Keira McDonald, discussing and imitating all her various famous celebrity lovers: Burt Lancaster, Tony Franciosa and a mumbling Marlon Brando. The script caught the tenor of a 50’s tell-all. That is to say, she had to be “in love” with all the men she had sex with in accordance with 1950’s zeitgeist. All this was accompanied by superb comic timing and facial expressions to die for.

Also, the two played doctor in two different sketches. In one, Ms. McDonald played the doctor to Ms. Stewart’s mid-30’s Seattleite, making a big joke out of the cavalier attitude towards prescribing anti-depressants.

In the other doctor sketch, the roles were reversed, and Ms. Stewart played a doctor taking a menopause inventory of Ms. McDonald. Quite frankly, it contained the funniest menopause jokes I have ever heard and the delivery could not have been better if the actress had been having hot-flashes right on stage. There were some juicy one-liners, which my editor will not allow me to quote, something about what this woman would like to do to a moose. So do not miss it.

Another wonderful sketch was THE DANCE AUDITION, and anyone who has ever auditioned for anything or competed with a friend for a job, will recognize the dynamic immediately. The self-aggrandizing recitation of a modest career brought the house down as did the 80’s costuming, music and choreography.

Not being a Star Trek fan (to say the least) I’m afraid I didn’t pick up a lot of the references to the Kate Mulgrew sketch, but it was nevertheless authentic Mulgrew, who I know from Orange is the New Black. However, it was still side-spittingly funny. Ms. Stewart’s acting can only be described as Tour de Force.

After two personal monologues to the audience, one by Ms. McDonald about a lesson in Uppity Womanhood by her 6th grade Texan teacher and another from Ms. McDonald, the show ended with a rap number about Susan B. Anthony and Elizabeth Cady Stanton, two 19th Century American Suffragettes.

Usually in theatre, before the tragic scenes, playwrights write comedic scenes so that the audience can release tension and really appreciate the next tragic scene; in this show, the tragic scene came first. Dressed up as what looked like two Christian girls in the South going to a party, our two comediennes accompanied a power-point tribute to Barak Obama, which brought tears to my eyes.

Between the endless expressions of conspicuous consumption of compassion of the left, the bizarreness of Trump and the unbroken chorus of the commentariat, there is not much to laugh about these days, but Keira McDonald and Erin Stewart made what promised to be a day of mourning, into an evening of laughter. Get your tickets now as there are not many seats.

Incidently, Happy Hour was just one of the many brilliant one and two person shows which 18th & Union has produced recently and there are several more scheduled. Their shows change nightly. For information see: http//18th and union.org.