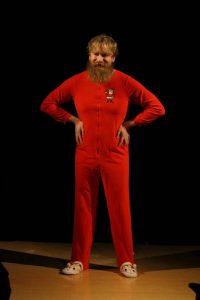 Santa sees you when you’re sleeping. He knows when you’re awake. He knows if you’ve been bad or good. How, exactly? Sugar Plum Gary takes the stage at 18th and Union to answer all your questions about Christmas in this interactive comedy show.

Emmett Montgomery, a veteran of Seattle’s alternative comedy scene possibly best known for his appearances on Last Comic Standing, transforms into Sugar Plum Gary with a help of a tight, red onesie. The orphanage Sugar Plum Gary lived in was visited by Santa Claus one night, and he was the only survivor. Now he’s a Santanist, and he’s here to spread the word about the true reason for the season.

Montgomery’s take on Santa Claus lore is closer to something out of H.P. Lovecraft than a Coca Cola commercial. Who is Mrs. Claus? Imagine a hideous old woman combined with a beautiful squid. The creatures we know as “reindeer” have hooves, horns, and can fly, but they’re not deer. And Sugar Plum Gary believes that Santa likes the cookies that look like us the most.

Sugar Plum Gary is one of 18th and Union’s three “Cracked Christmas” shows, counter-programming from the usual holiday fare. If you’re looking for something different this Christmas season, go see the hilarious, weird, and spooky Sugar Plum Gary.