Seattle comedy staples Lisa Koch and Peggy Platt are back with their irreverent, gender-bending sketch show. Ham for the Holidays is two hours of wacky characters, catchy songs, and clever satire, perfect for any lefty in need of a laugh. 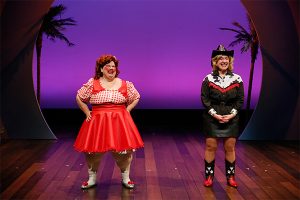 Peggy Platt and Lisa Koch as the Spudds

Koch and Platt (aka Dos Fallopia) have been performing Ham for the Holidays since 1996, and their years of experience have paid off. Their sketches can shift from silly to sharp while staying hilarious. In “Heartwood Mac,” they play aging rockers, and poke fun at topics from man-buns to abortion rights. Platt’s Slam Poet character lampoons both train-wreck artists and the 2016 election. Other sketches shine more light on the characters Koch and Platt have developed over the years. The “Sequim Gay Men’s Chorus” is a hilarious example. The mix of small town gay community drama with parody songs about Western Washington and the LGBTQIA experience is one of the shows highlights.

However, while writing is mostly sharp, and the satire  timely, other aspects of Ham for the Holidays feel dated. For example, I doubt younger comedians would have written the long-lost South American son character in “Sequim” as such a dumb, hyper-sexualized, Latino stereotype. But it’s the “Are You Smarter Than a Queen?” sketch that feels the dustiest. If the fact that the word “queen” can mean both “female monarch” and “gay man” isn’t immediately hilarious to you, and you don’t know who Bruce Vilanch is, this is bound to be your least favorite sketch.

Throughout Ham for the Holidays, Koch and Platt deliver skilled and hilarious performances. Platt especially shines as the Euomi Spudd and Slam Poet in their respective sketches. Supporting players Michael Oaks, Joel Domenico, Abbey Drake, and musical director Bruce Hall are consistently funny, especially during longer sketches when they have more developed characters.

Ham for the Holidays wouldn’t be half as fun without the great work by the production team. Robin McCartney’s props and sets, Kim Dancey’s costume design, and Akemi Hart’s wigs flesh out the show’s wacky world. Debra Mullins’s graphic design, Lisa Koch’s sound design, and Koch, Brian Walter, and Ken Boynton’s video work are all wonderful, whimsical compliments to the sketches.

If you need some holiday cheer and irreverent, mostly gay humor, get yourself a ticket to Ham for the Holidays. It’s a unique, silly, funny show for any adult with an open mind and a funny bone.