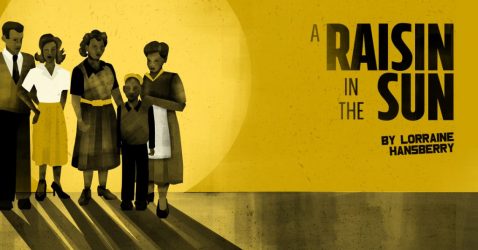 This Seattle Repertory Theatre production of A Raisin in the Sun impacts the audience with a potent, Brechtian blend of clean tech elements and refined acting. With a classic script written by Lorraine Hansberry and first produced in 1959, director Timothy McCuen Piggee leads the ensemble in relaxed, understated performances.  The show runs September 30-October 3 at the Seattle Repertory Theatre, located at Seattle Center.

Throughout the play technical elements communicate a symbolic, current-day interpretation of the realistic action in the dwarfed domestic set. A great deal of credit goes to lighting designer Robert J. Aguilar, scenic designer Michael Ganio, costume designer Melanie Taylor Burgess and sound designer Matt Starritt. In this “epic theatre” experience, the tech communicates as much or more than the story does. The audience is only partially engaged in the drama, but is fully engaged in figuring out the meaning of what we see.

In his pivotal poem, “Harlem,” Langston Hughes asks, “What happens to a dream deferred? Does it dry up like a raisin in the sun?” The title of A Raisin in the Sun refers to the American Dreams of homeownership, opportunity, and equality for all.

Reflecting these ideas, the stage is set with a 40’ wide projection of a rumpled and worn American flag spanning from the top border curtain to the crown molding of the realistic set. A monumental red brick wall wraps around three sides of the Younger family’s worn, modest two bedroom apartment. At curtain time, an even higher back portion of the wall is flown in. Upon completion, the 40’ wall looms in the background, with a single window and cloth flag draped a few feet below the top. The play is staged within and under a pen of racial oppression. The scale of human activity in relation to the wall shows little humans in their little home, where a family and even a neighborhood can do little to dismantle the institution of racism.

As I watched this play, my mind fixated on the geometry and physics of the characters’ relationship to that wall. If they perform an acrobatic feat, standing on each other’s shoulders, end-to-end, they could make a human ladder allowing the youngest members of the Younger family to escape through that window to the light. Lighting cues subtly accent the theme of sunshine, growth, and warm, intimate moments. Color themes span lights and costumes, reveling in warm tones of orange, red and pink to reflect that “The lion awakens” as African-American people reignite their African spirit. Cool toned light and costume themes reflect lifelessness and dormancy: black and blue, bruises; purple, opportunities for noble action; and grey, a heavy storm of discrimination and hopelessness. Bright green stands alone, representing the conception of new dreams, ideas and life. Transitional strains of smooth jazz connect the Younger family to the living culture in the broader setting of neighborhood and country. The tech provides its own cast of characters in this superb production.

The understated, never-forced acting style does not meet many of my expectations, but it works well into the Brechtian “estrangement model.” I went in craving a big, self-indulgent performance, to be immersed in the stereotypical Black soul of America. But that does not serve this production. Yes, the audience relishes the rare, high moments when Ruth, played by Mia Ellis, rises out of her usual plaintive voice and booms into bellows. When Lena, the matriarch played by Denise Burse, stands firm and moans with resonant strength that they haven’t come this far from slaves and sharecroppers to give up now. When Walter, performed by Richard Prioleau, turns from his irritable, craving-and-compromising ways to bravely stand by his family. And when Beneatha, actor Claudine Mboligikpelani Nako, dances a Nigerian welcome song, bathed in red light, the spirit of the motherland. In turn, each of the principle actors raise hands and waved arms to express human passions of craving, strain, surrender, and joy. The Youngers are easy to love. But their delivery has clearly been directed to fall within a limited range so it does not upstage the technical elements. The Youngers’ earnest simplicity seamlessly allows us to see the bigger picture: the oppression that dwarfs them. They can waive their arms, argue, forgive, love again–have their little crises and turning points. But as far as they can reach, and the inches that they move, are miniscule in scale compared to the darkening wall that holds them in place. The struggle with racism in this play feels nearly hopeless, virtually impossible.

In impoverished African-American families and neighborhoods, the home could be a place of hope, love, and growth. Outside, other influences dominate, and sometimes penetrate the roach-infested walls to feed. Beneatha, the idealistic student and cultural warrior, plays the exterminator. That’s one housekeeping task with which the entitled student helps her Mama (Lena). In tender moments, mother and daughter join to oust the roaches, a foolish and condescending suitor, and even the anger that separated Beneatha from her brother. Mama guides Beneatha to love even her sexist oppressor who is of her own blood: the annoying brother, Little Walter, who has continually told her what a hopeless, idealistic fool she is. Lena knows how important it is for the future of the family that Walter is lovingly integrated and not disappear into the streets.

After cycle upon cycle of Walter’s craving, scheming, gambling, losing, and approaching the brink of moral compromise, Walter finds integrity. Thanks to the support and wisdom of the women in his home, he regains his moral center. And when he “came into his manhood” in this way, he works with and honors the women in his home, particularly Beneatha in her drive to become a doctor. Walter honors the upstanding values of his father and the spirit of his African heritage.

Embracing Africanness is the cure for what ails the Younger family. In this production, Africa is represented in warm tones of orange and red. Beneatha’s luminescent orange dress, the lighting in the scene where Walter came home from the Green Hat jazz bar and danced a Nigerian welcome song with Beneatha, and the orange dawn light in that high window in the wall all represent the power and hope when African-American people come home to their essence. This is also the promise when Mr. Asagai, played by Ricardy Charles Fabre, asks Beneatha to marry him and come home with him to Nigeria. As the voice of Africa, Asagai helps Beneatha to detach from the insurance money that Walter lost, forswear the indignity of building her future on wealth from her father’s death, and work her own way toward her dream of becoming a doctor. In a way, Beneatha married the values that Assagai represented right on stage. But whether she would marry him, escape American apartheid and go to the motherland remained an open question.

In the Youngers’ home, living heritage allows the characters to overcome racial divisions. The women nurture the growth of men, both Walter and his son Travis, played by Jalani Clemmons and Catalino Manalang. That nurturing includes compassion, firm boundaries, and giving men a chance with authority and leadership.

Part of me wonders if Lena/Mama’s tragic flaw is her trust and belief in Walter, who shows harmful, addictive tendencies. When Mama trusts him with Beneatha’s college money and his own, he desperately places the family’s fate in the hands of his buddy in the street. The family takes a financial blow. But in the end, Mama’s boy grows and comes back from the streets. When he finds himself with real responsibility and high stakes, his mother, wife and sister provide a nourishing container in which to grow from a boy to a man. Walter’s whole gene pool props him up with their faith in him: Big Walter’s photo on the wall; the women looking to him to lead; and young Travis’ watchful eyes absorbing every impression of Walter’s choices. Walter chooses whether or not to take the money that the neighborhood association offers for the Youngers not to move into their neighborhood. After going to the brink of humiliation, in Lena’s words, he refuses “any money that was a way of telling us that we wasn’t fit to walk the earth.” He becomes the fit patriarch of the house that day. With Walter at the base of the human ladder, the family stands a chance of reaching the window in the wall.

Lena’s fortitude is the anchor for hope and growth in the family. Her precious little window plant grows slow and leggy in the shadow of racism. She holds the three divergent stems together with twine, just as she unites Beneatha, Ruth and Walter so the family can grow together. Lena’s strand of connecting thread/rope is a support and a rescue. If the family members manage to escape through the window in the wall, Travis and his expected baby sister will have a rope with which to climb down the other side. Escape is theoretically possible for the youngest of the Youngers.

A Raisin in the Sun is about faith, the power of a matriarch’s vision to integrate lost men back into the family. It illustrates the healthy traditional gender role approach to handling a destructive, abusive man. Hansberry’s script critiques second-wave feminism, represented by Beneatha’s tough, political idealism, as spiritually immature because it divides the family. The family is the container for transformation, growth, betterment, and no one could survive very well alone. In a poignant example of third-wave feminist expression steeped in her tradition and values, Mama chooses to create a nourishing container for the liberation of her intact family. That is her most valued asset, not money. So after she secures a fit home for the family, she risks a portion of the insurance money by giving Walter financial power as the trusted man of the house. She props him up morally, reminding him of past generations of slaves and sharecroppers, the integrity of Big Walter, and the impressionable eyes of Travis. Surrounded by everything he needs to do right, Walter can reject the indignity of being paid off to stay out of a white neighborhood.

I believed in Walter’s moral reversal the first time I saw this play decades ago. But as much as I want to, I can not believe the third-wave happy ending this time. This production leaves me feeling so depressed about the wall of racism that I can’t buy in to Walter’s transformation. Even the plump grapes and ripe fruit on the gardening hat that Travis gifts his grandma seemed delusional. The dream of homeownership is no longer deferred, but the play shows that the rest of African-American people’s dreams are still drying up like raisins in the sun.

The production elements make me stand apart from the human elements. With that wall penning everyone in, I feel stuck in the hopelessness that Beneatha represents when she mopes around in her grey sweater and purple skirt. How I want the wall to lift at the end, to bookend the first beat of the play when its massive height was lowered into place. But the play shows us the truth instead. My heart leaves heavy, witnessing the oppression under which the Youngers and many/all African American people live. This play makes the audience think, and feel, but not necessarily in unison. We are left to decide where hope lies, if anywhere.

A Raisin in the Sun