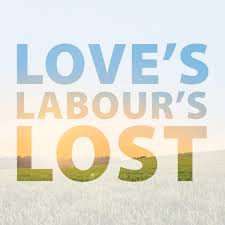 A joyous Love’s Labour’s Lost debuted last Sunday evening under a mottled sky and half moon in the Volunteer Park Amphitheatre. The Wooden O acting troop needed to compete with the usual open park distractions and an unceasing parade of overhead jets, yet they assembled an enjoyable evening for all.

Director Mary Machala set the story in the late 70’s Disco Era and reaped the benefits engendered from that quirky American time period. The opening scene featured the King of Navarre (Jason Marr) and three of his court members (Aaron Cammack, Benjamin McFadden and Marco Adiak Voli) immersed in a Jane Fonda-like jazzercise workout wearing brightly colored shorts. Remember how tiny men’s shorts used to be? To ensure his men remain focused on their scholarly studies, the king insists they vow to avoid the company of women for three years. Alas, the lovely Princess of France (a charming Betsy Schwartz) arrives with her ladies (Keiko Green, Courtney Bennett and Porscha Shaw) providing more than enough temptations to fill the rather thin plot line.

The play is early Shakespeare and finds the playwright still fine-tuning his voice. The script is chock full of wacky puns, quick-witted verbal jousting and silly stock characters. At this point of his career, the Bard seemed willing to give up depth of a solid characterization to keep the jokes and smart dialogue moving at a brisk pace. Though a large chunk of the playful language may have been lost in the outside venue, the able cast still managed to bring the story alive with the focus and energy the Wooden O has become known for.

David Pichette, most recently seen as Willy Loman in West Seattle, has a ball playing the arrogant Don Armado, a visiting Spaniard. His rolling R’s and stylistic hip thrusts delighted the crowd. The physical antics of the King’s Men made up many of the highlights of the show. Their playful camaraderie indicated that the four really were enjoying themselves and made their fun contagious. In a scene that makes little dramatic sense, they decide to disguise themselves as Russians, believing their ruse will somehow enable them to more successfully court the French women. The boy’s Russian disco dance was a showstopper, melding moves from Fiddler on the Roof and Saturday Night Fever.

Aaron Cammack as Berowne, one of the King’s men, provided a welcome respite from the high-energy silliness in the quieter scenes involving his courtship of Rosaline. Keiko Green skillfully portrayed his foil for these more grounded moments.

Like a number of Shakespeare’s comedies, the closing of the story includes a melancholy touch when we learn of the King of France’s death. All the characters antics in the wild pursuit of love take on a different hue when Shakespeare reminds us how fleeting our time on stage can be. The entire cast ably handled these more somber moments before sending us off into the Seattle summer evening with a joyfully sung “The Owl and the Cuckoo.”

Kelly McDonald created the spot on 70’s costumes and Kyle Thompson oversaw the 70’s soundtrack, Bee Gees and all! Aaron Cammack wrote the original music for the end song. The Wooden O’s Free Summer Shakespeare program has Love’s Labour’s Lost running in tandem with Hamlet through August 7. Donations are welcomed. For details concerning times and venues go to seattleshakespeare.org.