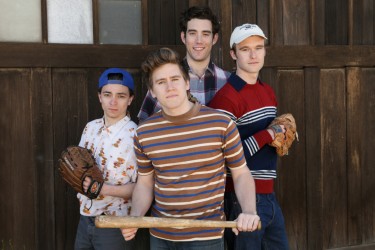 Book-It is offering a unique experience by presenting their theatrical adaptation of David James Duncan’s The Brothers K in two separate evenings. The novel contains a big story covering nearly two decades of the Chance family growing up in southern Washington State during the crazy years surrounding the Viet Nam War. Spending six acts with Hugh and Laurie and their six children as they navigate their lives, together or apart, proves to be wonderfully rewarding. Yes, committing to two nights of theater is daunting, but the two shows seen consecutively constantly gather momentum and deliver a solid home run by the end of their productions.

In my review of Part One, I worried that the play was spending too much time away from the parents who seemed to be the focus point of the narrative. Part Two continues to follow the Chance children, often leaving the parents out of large segments of the plot line. Yet Myra Platt who directed and adapted the work, never forgets the effects the parents have on their children. Hugh and Laura’s presence is felt wherever the rest of the family travels. The children continually see the world through the perspective inherited from their volatile parents.

Sons Peter and Everett are working at finding and centering themselves, Peter doing college research in India and Everett avoiding the draft in Canada. Irwin is trying to make some sense of his life in the godless quagmire of the Viet Nam battlefields. The two daughters struggle whether to accept the Seventh Day Adventist Church. Spencer Hamp again does some stellar work as the youngest son and narrator. He reports much of his sibling’s adventures through letters he receives from them. Through all of these conflicts the shadow of their struggling parents provides texturing shadows.

Again in Part Two, Gavin Hoffman and Alexandra Tavares are fantastic as the father and mother. Both actors offer up show stopping moments in their portrayals of a man and wife always trying to do what is right in a world that rarely lays out easy choices.

All is not well in the opening act as Hugh admits that “My wife doesn’t love me anymore—I got sad.” Their fights over Laurie’s passion for her church, portrayed in Part One have finally separated the couple. Hugh gets a second chance playing and coaching minor league baseball. The sport is celebrated as a way to make peacetime more entertaining, hopefully distracting our country from always wanting to enter one more battle.

The final act of the production offers up some joyful scenes as Hugh and Laurie’s worlds finally reconnect when they are faced with a frightening crisis involving Irwin’s return from the war. Amidst the morally confusing chaos of the early 1970’s, the Chance family emerges as a victorious unit in a celebration of love and life. Even Laurie’s commitment to her church is seen in a new, more forgiving light.

Forgiveness and acceptance abound as the family move on with their lives. The ever-growing clan emerges from their trials with a solid bond that helps them to face the inevitable sorrows that all families must contend with.

At the end of the evening, it is very hard to leave this group we have gotten to know so well through two nights of great theater. I encourage you to not miss your opportunity to hang out with the Chances!

The Brother K Parts One and Two run until June 26 at the Center Theatre at the Armory in the Seattle Center. For more ticket information call 206-216-0833 or go to www.book-it.org.