The Brothers K (Part One) at Book-It 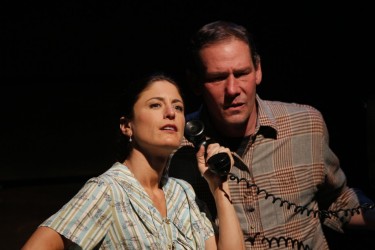 Alexandra Tavares and Gavin Hoffman as Laurie and Hugh Chance in The Brothers K.

Book-It is going for a homerun with their closing production of the season. Using the world of minor league baseball as a background, The Brothers K is a sprawling novel that spans the middle decades of the 20th century. A scoreboard that hangs over the stage indicates the passing dates as the story progresses. Part One begins in the late fifties and takes us up to the turbulent late 60’s. Myra Platt took on the monumental task of putting this work on stage; she has adapted the novel for Book-It and directs the show. The production requires the troupe to divide the undertaking into two separate evenings and uses 26 actors playing 83 roles.

Author David James Duncan places his saga in Camas, Washington where Hugh Chance toils at the paper mill; he describes his job as “A dead thing I do for money.” His dreams of being a baseball star are dashed in a work-related injury. Laura is the love of his life; yet scene-by-scene we become aware of her feverish devotion to the Seventh Day Adventist Church, a passion Hugh finds impossible to share. The sparks ignited by the parents have varying effects on their children as the years stream by. While not yet clearing the fences for a homer, the production of Part One ignites enough exciting moments to make the show well worth attending.

The youngest brother, Kade, narrates the story. Spencer Hamp ably handles this role. Trevor Cushman, Christopher Morson and Riley Shanahan assume the role of Kade’s brothers. The boys are loosely based on the family from Dostoyevsky’s The Brothers Karamazov. Duncan’s title riffs on this classic but also suggests the baseball use of the letter K: the symbol for a strikeout. More than one character in the narrative must face overwhelming obstacles that will send him or her back to the bench.

The Book-It style, in which a novel’s narration is shared among characters on stage, is most effective when reviewing the courtship of Hugh and Laura. Gavin Hoffman and Alexandra Tavares portray the couple and they are outstanding.

Hoffman visibly wears down as his character trudges through a life of lost dreams and increasingly demanding responsibilities heading up a family. Hugh has an obvious prowess for baseball, but the scenes involving him in the game are played in the muted tones of a character who knows that any second something in his life could easily go off the rails. He practices pitching in a homemade shed, his face etched in a startling blend of hope and anger.

Tavares has the most fascinating role in the show. She is a sympathetic and loving mother, yet her fanatical adherence to her religion inevitably drives her further and further away from her husband and children. The machinations her husband contrives to keep the family afloat during her more hysterical moments provide for riveting theater.

The production is less successful when it leaves the parents and focuses on the brothers as they navigate their way through the Viet Nam scarred 60’s. Here Book-It’s dedication to the text can be a detriment. While a novel can take its time to further explore other lives branching out in separate directions, a play demands a more solid “through-line.” I wanted the show to get back to the parents much more quickly. The awful war and hippie protests confronting the older brothers made for a workable conflict, but the characters seemed flat and a bit stereotyped. Shanahan does have some moving scenes as perhaps the most innocent brother. His impending shipment off to Viet Nam and the confusion he feels over the role his church should play in his life enable his character to be very sympathetic.

Matt Starritt is the sound designer for the show; he puts together a dynamite musical background following the plotline from the innocent strains of 50’s rock to the howling tunes of a young Bob Dylan. I’d love to get that soundtrack on my playlist.

Book-It will open Part Two of The Brothers K on May 13. They are doing enough right here to bring us all back to the theater. I wouldn’t even mind if they went into extra innings!

The Brother K runs until June 26 at the Center Theatre at the Armory in the Seattle Center. For more ticket information call 206-216-0833 or go to www.book-it.org.