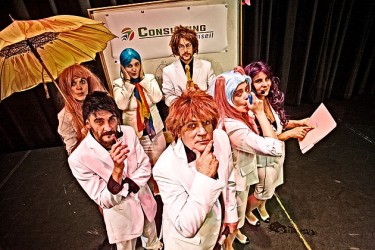 Building takes place in the 13 stories of the building which houses Consulting Conseil ( Consulting Advisors) The use of English businessese in French is significant because it indicates up-to-date slimey American style psycho-babble marketing tactics, right out of an MBA program.  Each of the 13 scenes takes place on a different floor and department of the building, while the play begins with “Le président directeur général” (The president director-general-is the rough translation, the smooth translation would be the CEO-Managing Director-Chairman of the Board.) Le PDG makes a motivational speech, which is as brilliant as any speech Hitler ever gave. It was full of banal meaningless buzzwords delivered in a semi-trancelike state, which engaged the audience immediately.

The play moves on through the various departments to unbelievable levels of phoniness, through the accounting department, the janitors, HR, the cafeteria, to the end when le PDG unmasks himself and the company and just rants about the bottom line.Playing multiple roles using little more than wigs and themselves to distinguish different characters, the actors, Gilbert Amar, Grégory Galin, Nancy Saussac, Delphine Liénard, Lionel Rougé, Camille Le Marchand and Helene Flurin really entertained us with highly energetic performances. Also, the director made creative and interesting choices and kept everything moving.

In my opinion, I felt that the author was commenting on the phoniness of not only corporate America, but on American society in general, the over-friendliness, which means absolutely nothing, the cheerfulness which hides malice, the “openness” which is used to manipulate and wound.

At any rate, it was an extremely amusing evening and I urge everyone, whether you understand French or not, to get down to Seattle Center on this rainy Sunday afternoon and have a few laughs, especially if you have to face corporate American on Monday.