The Reckoning, Pecora for the Public 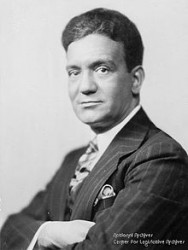 Government of the Banks, for the Banks and by the Banks

The above quote appeared in a Wall St. Journal article, during the 1933 United States Senate Banking Committee hearings, which investigated the role that the Wall Street head honchos played in the 1929 stock market crash.  The investigation as well as the lead investigator, Ferdinand Pecora, was the subject of a world premier, The Reckoning, Pecora for the Public, by Neil Thomas Proto, at the Alhadeff Studio Theatre at Seattle Center, this weekend.  Enthralling was one adjective which sprang to mind, along with extremely topical. When I was not laughing, I felt intense moral outrage, as well as feeling that it  was the best one-person show I have ever seen.   Possibly it is the best solo play ever written.
The play was divided into two acts, Act I introduced Pecora himself, providing some background into the class structure of the New York/ East Coast establishment politics in the early 20th Century.  At the time, there was a powerful interrelated elite group of White Anglo Saxon Protestants, whose families dated from Colonial days.  Then there were the despised 19th Century urban immigrants, who were definitely not Protestant :  Italians, Irish and Jews.  Having swarthy looks and an Italian last name was a big burden in those pre-political correctness days of severe ethnic and religious divisions.

Pecora recounts his impoverished immigrant childhood, not with bitterness, but with pride because his parents instilled in him the concept of “Justice”, as well as faith in the American legal system. Even though his father and two brothers died, he managed to become a lawyer.  After working as a prosecutor in the 20’s, he got a job as the lead investigator of the Senate Committee in 1933.  The date the committee was set up is, in my opinion highly significant, as it was four years after the crash, and  just after the country had elected Franklin D. Roosevelt

Act II was the hearings themselves and that was where the fun began. Using a “bedside” manner worthy of a doctor asking a dying patient about their symptoms,  Pecora questioned and cross examined the CEO’s of JP Morgan, Chase and CitiBank.   Their responses were ludicrous, but the information it revealed made Watergate, Enron and the Bernie Madoff scandals look like child’s play.  For example, in December 1929, two months after the stock-market crash, the banks were paying over $1 million in bonuses to the trustees, and nothing to the stockholders.  This at a time when U.S. Senators made $10,000 per year.

As a result of these hearings several individuals were indicted and fined. The president of the Stock Exchange was found guilty of embezzlement.  Congress passed the Securities Act of 1933 to penalize brokers who filed false stock information, the Securities and Exchange Commission was set up in 1934 to monitor Wall St. Most importantly, the Glass-Steagall Banking Act of 1933, which separated commercial from investment banking, was enacted in 1933. Unfortunately in 1999, under Clinton I’s watch, this bill was repealed, which led to Great Depression II or the sub-prime melt-down of 2008. Many people fondly remembered Pecora during our recent crash. N.B. Bernie Sanders has promised to reinstate it.

Directed by veteran Seattle director Arne Zaslove and starring Bob DeDea as Pecora, the play did not suffer the usual weaknesses of one person shows because of the magnificent storytelling ability of actor Bob De Dea.  As Pecora,  DeDea had the most enticing ability to draw the audience into the narrative immediately with warmth and humor, without sacrificing moral outrage.

Another strength, by director Zaslove, was adding what can only be called a “video-track” a power-point presentation on a screen above the stage. It supplemented the complex information, provided visual variation, evocative imagery and instructed the audience about the heinous amoral “business” practices of Wall Street banks.

Keehn Thomsen who created the “video-track” deserves high accolades.   Composer Theodore Deacon added just the right touch with his original music; both acts started with simple slow moving music suggesting malicious suspense.  The music ending Act I suggested the melancholy of the depression causing the audience to viscerally feel the consequences of the greed of the Wall Street elites on ordinary citizens.  My only criticism of the music was that there wasn’t enough of it !  All the details of the set, and costume were accurate, from the 48-star American flag, to the 30’s style telephone,  the double breasted-suit, wide tie and Fedora hat.

Proto the author is a lawyer, for a lawyer, the writing was surprisingly poetic, with quite a few poignant quotes from Shakespeare. Pecora’s love of Shakespeare was not just a love a poetry but also of the moral lessons found in Shakespeare’s tragedies.  His sense of justice was also reinforced by his Sicilian parents who came to this country to escape the oppression of the old world.  For example, his father had found the Catholic church oppressive, so he raised his family Protestant, which was highly unconventional for any immigrant family.

The only slight flaw was that the play seemed a tad under rehearsed. A more than 2 hour play for any actor is a Herculean task, in spite of his very endearing performance, De Dea stumbled rather too many times.   However, it did not mar my enjoyment of a masterful delivery of a masterful piece of writing.

In life, it isn’t often that one can brag about having seen the original production of a great play destined to go down in history.   If you want to be able to do it in your old age, I would definitely get a ticket to The Reckoning, Pecora for the Public because it is likely to go down in history, as not only highly significant for our era, but for any era.