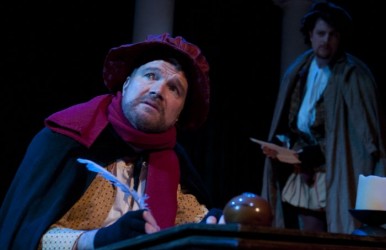 Frank Lawler as Will Shakespeare

In these dark times, a comedy riff on Shakespeare and Dickens seemed like just the thing to raise my spirits. Sound Theatre Company’s revival of last year’s “Holiday of Errors” raises several spirits (Marlowe’s ghost, Richard III), but despite some good chuckles and clever wordplay, fails to quite dispel the gloom.

The Shakespeare mash-up has become such a familiar trope that a troupe needs pretty inspirational material and direction to pull off yet another. However, despite the witty script by Frank Lawler and Daniel Flint, and Teresa Thuman’s competent, if somewhat plodding direction, more of “Holiday of Errors ” seems wooden than the set. The script, for all its cleverness, ticks along with metronomic regularity from punchline to punchline; slapstick stage business evokes chuckles; thespian in-jokes amuse some, perplex others; rewritten holiday carols appear and are forgotten; sound effects chime and clang offstage. In short, the predictable elements of a Seattle lightweight, holiday romp are there. But somehow, we are not that amused. It all seems pretty familiar: one “badaboom” after another of word twist, title mix-up, misplaced quote, and the inevitable zombie or two. And there’s perhaps one “Bah, humbug” joke too many. 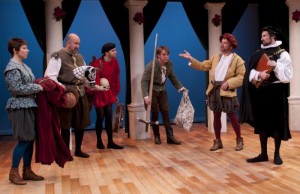 The story doesn’t really matter. Quotes and characters and story memes are tumbled together with Dickens’ “A Christmas Carol” and what the program calls “semi-historical facts” to fabricate a madcap backstory to the creation of the play “Twelfth Night.” The cross-references to Dickens are cute, but seem spurious — although without them, the line “Marlowe was dead, to begin with” would not have been possible, and it was one of many laugh-out-loud moments in this not-all-bad comedy.

The best thing about this show, having shared my pique about the script and direction, is the acting. A solid troupe of comedians pick up the heavy-laden script and carry it farther than they should have to — two hours, including an intermission. (This is a play that needs to move trippingly and be done in well under an hour and a half. There’s just not that much there there.)

But enough of my griping. There is good news: Frank Lawler (who co-wrote the script with Daniel Flint) brings existential angst to a Shakespeare who seems continually to be gnashing his teeth as a playwright surrounded by enemies, nincompoops, and yes, even ghosts. Chris Shea is quietly hilarious as Will’s sidekick actor Richard Burbage, veering easily from underplay to gags as broad as a line of actors bumping in succession. Ian Bond, Patrick Lennon, Damien Charboneau and Bob Williams all brighten the stage in their individual ways and help keep the audience smiling during some of the dry stretches between jokes.

Marianna de Fazio channels an Arlecchino-like energy as the cross-dressing actor in Shakespeare’s troupe, whose mission to Queen Elizabeth (Elinor Gunn) sets in motion the comedy of mistaken identities and love interests. She is great fun to watch. 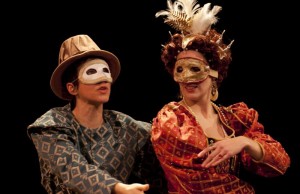 Terry Boyd, as the Lord Mayor concealing his penchant for flagellation at an Elizabethan sex club called the Iron Codpiece, is a commanding presence on the boards and a satisfyingly hypocritical puritan. 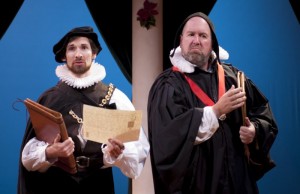 Lastly and memorably is the sordid, sinuous presence of the ghost of “Kit” Marlowe (Daniel Stoltenberg), convinced he is still alive despite a searing headache brought on by a slight case of being stabbed through the eye. His many apparitions provide some of the better moments of interaction among W.S. and his cast of characters. What a shame, though, that he never does walk through that “fourth wall.” 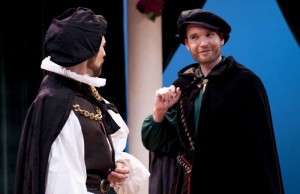 Together, the hard-working actors overcome many problems of an over-long script and somewhat sluggish tempo to make the most of what the script can offer: some good guffaws, a dip in the punch-bowl of Seattle’s over-rich holiday arts scene, and brief respite from a world that seems almost as crazy and pointless as “Holiday of Errors” itself.

Go ahead: call me Scrooge. Probably most people will find the whole thing very funny. Bah, umbrage! Go have fun.

by Frank Lawler and Daniel Flint