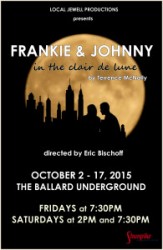 Frankie and Johnny in the Clair de Lune

Although it opened on Broadway in 1987, Terence McNally’s Frankie and Johnny at the Clair de Lune was originally written in 1982. The title and the date when it was written speak volumes. Surprisingly, it is incredibly dated, and although the author struggles to give it an optimistic ending, there has been too much mainstreaming of 12-step concepts in the intervening 30 plus years as well as knowledge about the characteristics of narcissism for me to overlook the potentially destructive aspects inherent in the budding relationship of a middle aged waitress and a middle-aged cook depicted in two-person play.

SPT at the Bathhouse’s “Bad Jews”

SPT’s production of “Bad Jews” delivers a mixed bag of entertainment. The one-act play by young Julliard graduate student Joshua Harmon features a solid premise and potentially fascinating characters, but fails to earn some of the intense conflicts it throws at us. It does present what must be one of the most dynamic performances this season from SPT rookie, Anna Kasabyan. Her monologues recall the breath taking bitter humor of the iconic Lenny Bruce. Her riveting, laser-focused performance is worth a trip to Green Lake to see.