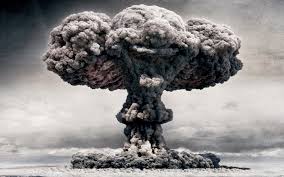 Mr. Burns, a post-electric play opens with the kind of disaster we have been fearing since Chernobyl. After a nationwide power failure causes a chain of nuclear meltdowns across the United States, a group of survivors crowd around a fireplace and recount their favorite episodes of The Simpsons in an attempt to stray away from the destruction around them. From there, the play leaps seven years into the future, where theatre troupes put on live productions of television shows in an effort to recapture the televised media that was lost when the grid shut down. Fast forward seventy-five years later, and the last act takes us to a far-off future in which pop culture and media have warped and twisted together until the theatre of the future becomes a semblance of a Greek epic opera revolving around the Cape Feare episode of The Simpsons.

From beginning to end, the ensemble of Mr. Burns was on fire. Each actor crafted a unique, nuanced portrayal of their character, working with each other in a dance of perfect chemistry. Erik Gratton, who plays Matt, had one of the most convincing Homer Simpson impressions I’ve ever seen, but it was Adam Standley’s nervous, thoughtful Gibson (and later, erratic, over-the-top Mr. Burns) that stole the show. Watching him develop throughout the course of the show – culminating in one of the most theatrical villains I’ve ever seen – was an absolute delight. A nod of recognition also belongs to the always wonderful Anne Allgood, who shone as Jenny even when her Marge fell a little flat, and Claudine Mboligikpelani Nako, who also commanded her own portion of the stage as Colleen.

Unsurprising given the number of big names on the production team, it was the design that really made the entire show. Geoff Korf’s lighting comes to mind as incredibly well-thought out and impressively precise. Though the third act definitely could have gone south – the nature of the opera called for quite a bit of light work – Korf’s design never bordered on gaudy or gratuitous. In addition, Matt Smucker’s heavy-duty set (especially the lightbulb wall) worked especially well in combination with Deb Trout’s creepy, apocalyptic Simpsons masks in the last act.

Despite the weird, esoteric nature of the script – one that leaves the audience up late thinking about it – John Langs’ direction is tight and specific enough to draw out an extraordinarily complex, poignant meaning about the nature of storytelling and how we pass down ideas. Mr. Burns reads almost as a game of telephone gone wrong; of a story that began as a cartoon show and ended up getting worked through the machine of time until it became an exaggerated portrayal of survival. Not only that, but the fact that the details of the actual nuclear meltdown are never clearly stated and have to be picked apart and pieced together in order to understand the backstory really says something about how people react when disaster strikes: we don’t run towards it, we pretend it doesn’t exist. Now that’s what I call a story.

All in all, Mr. Burns, a post-electric play is one you won’t want to miss. Because of the mature thematic elements – including real and recorded gunfire – it’s probably best to leave the kids at home, but this is one that both college age students and the older generation will be able to engage in a clever, nuanced dialogue about.

Read other reviews by Noah Blakely