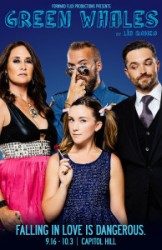 Not Everything Kinky is Unhealthy

Usually when I go to see a show with a small cast, in the back room of a café, I do not expect to see such an amazingly polished script or cast, as Forward Flux Productions presented in the “auditorium” of the Kaladi Brothers Coffee Shop/Gay City bookstore in lower Capitol Hill last Friday night. Green Whales, by Lia Romeo, defied all my expectations , being a truly amazing script with superb dialogue, a coherent plot, a quirky premise and one of the quickest most engaging pieces of exposition I have ever seen. The excellent direction by Wesley Frugé, added to the delight.

The two subplots involve two sisters, well past their prime, taking the dangerous step towards relationship commitment. As a result of their advanced age, they no longer have much idealism about dating or men.yet with their eyes-wide open, they do decide to take the plunge.

The author also explores the theme of sisterly bonding and how two sisters, close in age, can be polar opposites, which happens often dysfunctional families. The first scene opens with two women, sitting with a bottle of vodka, dressed in black, having a post-mortem of their evil mother’s funeral. The older sister, Karen, played by Rachel Anne Godbe, a philosophy online professor, is conservatively dressed, short, thin and has a modest hair cut. In contrast the younger sister, Joanna, played by Leslie Widom,  an actress/waitress is buxom, wears a low-cut, short-skirted dress which shows off every curve, high-heels and her hair-do makes Cher’s look modest. She also drinks like a fish.

As they dissect the funeral, we learn just what an awful mother they had, and we see the intense sisterly bond between them. A drunken Joanna, who has a cop for a live-in boyfriend, hatches a plot to find a date for Karen. Not to spoil it, nor give the impression that there is something nasty about the show, I leave it to the audience to find out the quirky way Joanna goes about finding a date for Karen.

Joanna also wants to settle down, quit drinking and marry the cop, who seems to be one of those cops, who probably grew up with a lot of criminals and ne’er do wells himself and just happened to become a cop to continue his matcho behavior.

Into this mix comes a recently divorced slightly depressed advertising executive who becomes deeply attracted to Karen in spite of an almost insurmountable barrier.

The dialogue was incredibly hilarious, the situation itself was not exactly the run of the mill romantic comedy and the author, knew exactly how to extract every ounce of comedy from what was a fairly tragic situation. In addition, Romeo also knew how to construct a tight interwoven plot, which was positive and upbeat in spite of a pretty dark sinister premise. ( which will be revealed if you go to the show!!!)

Director Wesley Frugé made some excellent costuming and casting choices, in the first scene for example, the costumes of the two female leads immediately tell us just about everything about their personalities. Casting a bearded Clayton Michael, as Ian, the advertising executive, rather than a clean-shaven Don Draper type, was spot on. The beard made him seem more intellectual, as his first encounter with Karen happened because he wanted to discuss the book she was reading: Sartre’s Being and Nothingness.

Craig Peterson as the matcho cop was not well cast. He looked younger than the woman he was living with, and his acting was mostly caricatured. The decision to give him an East Coast working class accent, for a play which took place outside of Seattle, did not, in my opinion, work well and since the actor did not execute the accent well, it added to the inauthentic air he portrayed.

However, it was an extremely enjoyable evening and the audience laughed and laughed. For anyone who has experienced having to go to the funeral of an evil mother it was therapeutic and for anyone who has bonded with a sibling over the endless process of coming to terms with one’s parents effect on one’s life, this show is a must see.