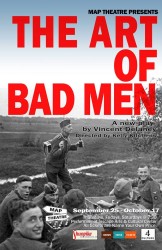 In Vincent Delaney’s captivating and uplifting new play at MAP Theater, real life stories of German prisoners of war held in Minnesota during World War II are spun into a funny, tragic and rich web of interaction between life and art that builds to a transcendent, emotionally stunning point of truth. 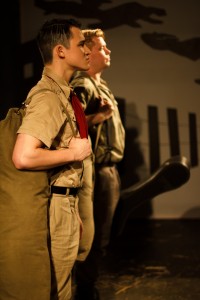 Based on interviews Delaney conducted in 2004 with elderly former German POW’s, “The Art of Bad Men” grippingly explores theater as transformational art. As the characters of the play gradually shed self-delusion, pretense, and adherence to dead ideas, each discovers and discloses greater humanity and authenticity. Art, music, theater, even cinema play a part in this process.

Kelly Kitchens’ skilled and unobtrusive direction makes optimal use of the small theater space at InScape, and trusts the well-honed script (which has had reading productions in New York and Minnesota before its Seattle début) to carry the audience scene by scene nearer to the true hearts of people in all their complex layers of good and bad.

Three German POW’s are loosely held in a minimum-security work farm somewhere in Minnesota. Kurt (Benjamin McFadden, who carries the surprising arc of his challenging role with humility and self-control) begins as a flat-toned SS officer still mouthing Nazi slogans and plotting resistance. 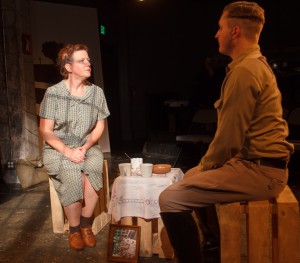 His underling and fellow prisoner Gerhardt (Ben Burris, deftly charting a path from callow malingerer to a man genuinely touched by love and commitment) seems content to wait out the war in comfort, stealing cigarettes from his guard and trying to seduce local women.

When joined by a third prisoner, a cowed teenage conscript Franz (poised, vulnerable Sean Schroeder,) the dynamic begins to shift. As Franz charms his fellow-prisoners into fulfilling his dream of directing a production of Molière’s “The Miser,” “Bad Men” goes meta: the intersection of reality and theater inherent in the play’s origins is doubled by the gradually unfolding parallels among the play-within-the-play characters and the men who play them. Harpagon (Molière’s “bad man,” played by the Nazi true-believer, Kurt) attempts to boondoggle Cléante, (Gerhardt, who under Franz’ direction begins to connect with his real emotions) who is in love with Mariane (Franz, cross-dressing with apparent delight and stepping out of fear into artistic bliss.) 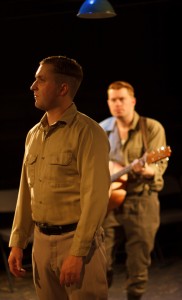 For an audience watching actors play characters playing characters and in the process uncovering  truths about themselves, the art of theater intersects with life delightfully and movingly in the layers of this well-crafted script and intimate, un-gimmicky production. 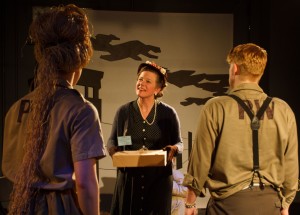 Brandon Ryan and Peggy Gannon, MAP co-producers, both shine in important roles: Ryan as the hapless guard Harvey, who enables the prisoners’ comings and goings beyond the fence; Gannon as Emma, Kurt’s immigrant sister, who refrains from enabling her delusional brother, finding and offering a surrogate family to young Franz. Last but not least, Grace Carmack is full of surprises and unexpected depths as Cordelia — somewhat implausibly named, it seems, but who knows; perhaps there was such a person in Minnesota in 1944. Her character is delightfully mercurial and entirely plausible. 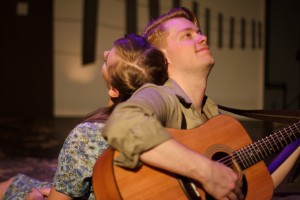 “The Art of Bad Men” is clearly not just about bad men, nor men alone, but about the ways that humans, across the cultures, languages, and politics that divide us, manage in spite of all odds and all heartbreak to find in art – and specifically theater – that which at deepest levels can unite, uplift and heal us.

To reveal much more about this funny, gripping and memorable production would spoil the experience for coming audiences. In the intimate setting of InSpace, with little more than hay bales and barb wire to set the scene, MAP Theater does again what it seems to do best: choose great scripts, draw together some of the best local talent, and deliver the goods at a very reasonable price.

That’s not bad at all.

“The Art of Bad Men,” by Vincent Delaney

Thursdays, Fridays, Saturdays Sept. 25-Oct. 17  All tickets are pay what you can.