A Subversive and Succulent “Feast” 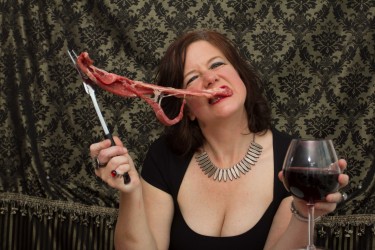 “In a dining room, not so far from where we are sitting now…” is the setting for MAP Theatre’s twistedly funny and irreverent tour de force, “The Feast,” by Celine Song. Director Aimée Bruneau, with a well-synched foursome of actors, has turned a challenging script into a close-up funhouse of horrors in which story, set, lighting, sound and a few special effects merge into a nightmarishly plausible romp though the dark underbelly of … well, I won’t say exactly what. Think: Edward Albee meets Edward Gorey.

The story unfolds in an America where a bacterial outbreak has caused all meat to be yanked from stores. The four protagonists pay lip service to salads and vegetables while gradually succumbing to a ravenous craving for meat of any variety. An aging married couple and a young friend are guests of Wendy Darling – an amusingly perverse allusion to a very different Never-never land. Wendy’s husband, a surgeon, is delayed by a surgery gone awry, the details of which we glean snippet-wise in a series of phone calls from the increasingly desperate hostess.

During the wait, through monologues, interactions, parlor games, arguments, revelations, and reveries about meat in all its succulent, unattainable goodness, barriers fall, truths are told, a lot of wine is drunk, and the veneer of civilization gets pretty badly warped by the onslaught of hunger, alcohol, anger and eros. By the time the unseen husband arrives, well… things have rather fallen apart.

MAP Theatre’s stated mission is to produce “comedy that hurts a bit.” Mission accomplished! Peggy Gannon’s opening monologue, set against a near-frozen tableau of her dining room guests, quickly dispels any illusions that the evening will be painless. Speaking directly to the audience, practically sitting in their laps at times, Gannon offers a laugh-out-loud rationalization and disturbingly convincing seduction of the audience with “just a thought” of the unthinkable. In casual pre-dinner conversation, Mia Morris and Mark Fullerton as the couple, Sam and Rhett, expose their loathing for one another with unfailing passive-aggressivity and nuanced precision. Brandon Ryan’s apparently inoffensive, meek young Xander describes the “dignity” with which his animal subjects are treated in the vivisection lab. The language of poetry soothes and reassures his audience in the dining room, while the contrast between the scientific soullessness of his work and the beauty he purports to find in it creates funnybone-jarring cognitive dissonances.

Each character has his or her moments under the microscope, and in the intimacy of The Schmee theater, one can’t help but feel the lens turned on oneself as well. With a kind of madcap glee the play rubs our faces in visions of a world that we somehow know exists, somewhere, beyond the borders of the admissible, in our heart of hearts and in the sick fabric of the society we wear like clothing to hide our animal skins and instincts. The ensemble flawlessly captures both the madness and the normalcy of that world, with the vulnerability, fragility, and underlying hideousness of human nature. 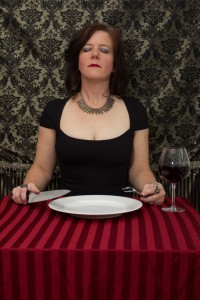 Aimée Bruneau and her team have crafted a thrillingly sustained knife-edge between nightmare and normalcy. Joseph Swartz’ near-subliminal soundtrack moves from muzak to faintly spooky organ to heart-pumping beat samples – bass theme from House of Cards, is it? Suzi Tucker’s set is awesome in its blandness, terrifying in its transformation. Staging effects come off flawlessly and further tilt the disintegrating world of the play toward chaos as the tension mounts, hunger grows, and limits stretch. Maggie Lee’s vivid lighting distinguishes the world of the dining room from a parallel world of individuals as they reveal or defend secrets, fears, and histories, and effectively highlights the just-off colors and styles of K.D. Schill’s inspired costume choices. The episodic script reveals one or two structural weaknesses that Bruneau’s very steady directorial hand overcomes; tension and general weirdness rise exponentially as dinner approaches.

“The Feast” truly is a delight to the eyes and the spirit. There is something gorgeously satisfying in its taboo-shattering; without touting any explicit political agenda (meat-eaters will enjoy this as much or more than vegans) one nonetheless emerges, shaken and delighted, with the sense of having participated in 90 minutes of very welcome subversion of the status quo.

This is a short run and a small house. Get in there while dinner is being served. And bring something non-perishable to donate to Northwest Harvest at the box office.